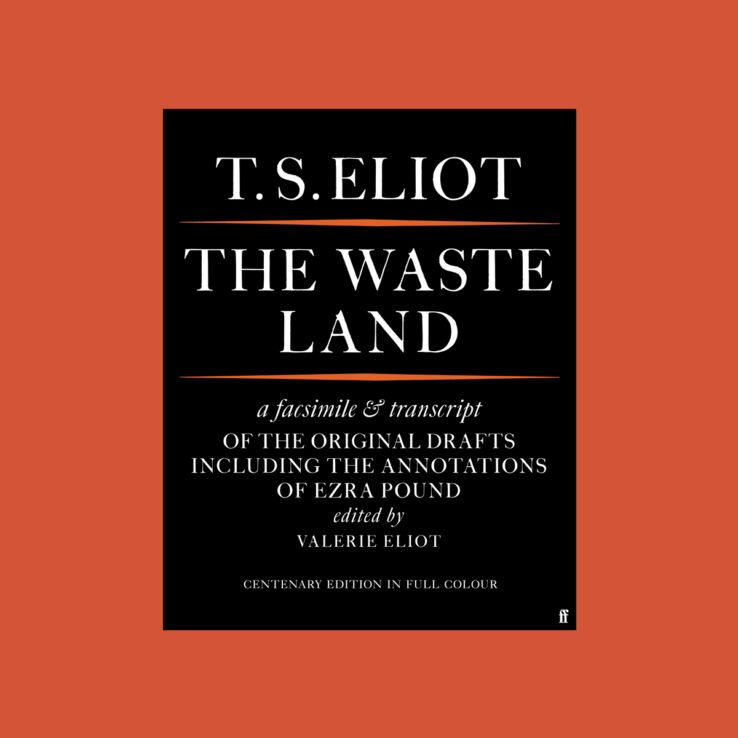 T. S. Eliot
£12 | £10 concessions. To mark the centenary of T.S. Eliot’s masterpiece, join us for a very special full reading of The Waste Land at St Mary Woolnoth in the City of London, by three of Faber’s leading contemporary poets, Daljit Nagra, Richard Scott and Hannah Sullivan.

The reading takes place in the atmospheric surroundings of St Mary Woolnoth, one of the two City of London churches mentioned by Eliot in the poem. Working for Lloyd’s Bank from 1917 to 1925, Eliot knew the church well, passing it twice a day on his commute and often spending his lunch hour inside.

Under a brown fog of a winter dawn,

A crowd flowed over London Bridge, so many,

I had not thought death had undone so many.

Sighs, short and infrequent, were exhaled,

And each man fixed his eyes before his feet.

Flowed up the hill and down King William Street,

To where Saint Mary Woolnoth kept the hours

With a dead sound on the final stroke of nine.

Daljit Nagra has published four books of poetry with Faber. He is Professor of Creative Writing at Brunel University, Chair of the Royal Society of Literature, Council member of the Society of Authors and a PBS New Generation Poet. Daljit’s collections have won the Forward Prize for Best Single Poem and Best First Collection, the South Bank Show Decibel Award and the Cholmondeley Award, and been shortlisted for the Costa Prize and twice for the T. S. Eliot Prize. The inaugural Poet-in-Residence for Radio 4 and Radio 4 Extra, he presents the weekly Poetry Extra. His poems have appeared in the New Yorker, the LRB and the TLS, and his journalism in the FT and the Guardian.

Richard Scott was born in London. His first book Soho (Faber & Faber, 2018) was a Gay’s the Word book of the year and shortlisted for the T. S. Eliot prize. Recent works include ‘Quartz’ in Poetry Review and ‘Amethyst’ in the anthology Queer Life, Queer Love (Muswell Press). Richard’s poetry has been translated into German and French. He is a lecturer in creative writing at Goldsmiths, University of London and he teaches poetry at the Faber Academy.

Hannah Sullivan is an Associate Professor of English at New College, Oxford. Her study of modernist writing, The Work of Revision, was published in 2013 and awarded the Rose Mary Crawshay Prize by the British Academy. Her debut collection, Three Poems (2018) won the T. S. Eliot Prize. Was It for This will be published in January 2023.

This is an in-person event which will take place at St Mary Woolnoth, 1 King William St, London EC4N 7BJ

The event will last approximately 40–45 minutes.

Thomas Stearns Eliot, poet, critic, publisher, was born in St Louis, Missouri, in 1888. He settled in England in 1915, where for a few years he worked in the foreign section of Lloyds Bank. His first book of poems, Prufrock and Other Observations, was published in 1917. In 1922, he became editor of the literary journal, The Criterion, publishing The Waste Land in its first… First ever full-colour edition of The Waste Land to mark the 50th Anniversary edition of the revolutionary poem by T. S. Eliot.