Format
Ebook
ISBN
9780571304912
Date Published
15.10.2013
Delivery
All orders are sent via Royal Mail and are tracked: choose from standard or premium delivery.
Summary

N. F. Simpson was one of the leading exponents of the theatre of the absurd, and is best known for his play A Resounding Tinkle, made famous by its premiere at the Royal Court in 1957, and later to star Peter Cook. But beyond that he was a major force in the satire boom of the sixties, and wrote much exceptional comedy for film and TV for the likes of John Cleese, Beryl Reid, Hattie Jacques and Eric Sykes, as well as a number of brilliantly funny plays for theatre, which starred big names such as Harold Pinter and Kenneth Williams. His influence on everyone from Peter Cook’s much-loved character E. L. Wisty to Monty Python’s Flying Circus helped spawn a generation of incredible comic talent.

Plays included in the collection are A Resounding Tinkle, The Hole, Gladly Otherwise, One Way Pendulum, The Cresta Run, Was He Anyone? and his final work, If So, Then Yes, first performed in 2010.

This collection celebrates the work of this lost comic genius, and seeks to put his reputation back at the heart of British – and world – comedy.

Born in 1919, N. F. Simpson’s works include A Resounding Tinkle (1957), The Hole (1957) and One Way Pendulum (1959), all of which premiered at the Royal Court Theatre, London, under the direction of William Gaskill. In 1964, a film of One Way Pendulum was released featuring Jonathan Miller, who in 1988 staged the play at the Old Vic Theatre.… 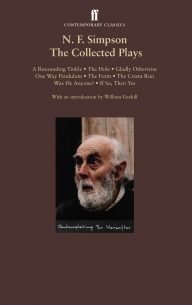