Adventures With the Wife in Space

Adventures With the Wife in Space: Living With Doctor Who by Neil Perryman tells a frank and honest story of life as a Doctor Who fan.

Format
Paperback
ISBN
9780571298112
Date Published
07.08.2014
Delivery
All orders are sent via Royal Mail and are tracked: choose from standard or premium delivery.
Summary

‘One of the oddities of Doctor Who is that you hear so much about what the fans think, and so little from the other 100 percent of the audience (my stats are clinically accurate.) So thank God for a couple who put their love on the line to set the record straight. This is the story of a fan boy who inflicts every episode ever made of Doctor Who on his marriage. Or to put it another way, this is the story of someone with a proper love and understanding of Doctor Who, trying to explain it to her husband.’ Steven Moffat

Neil loves Sue. He also loves Doctor Who. But can he bring his two great loves together? In January 2011, Neil Perryman set out on an insane quest to make his wife Sue watch every episode of the classic series of Doctor Who from the very beginning. Even the ones that didn’t exist any more. And so, over the next two and half years, Sue gamely watched them all. From William Hartnell and Tom Baker to Peter Davison and Paul McGann, the result was a wildly successful and hilariously revealing blog called Adventures with the Wife in Space.

But the adventure continues. Here Neil Perryman tells the all too true story of Doctor Who fandom. Funny, honest and surprisingly brave, he also captures perfectly the joys – and fears – of sharing the thing you love with the people you love. Adventures With the Wife in Space is, at its heart, the story of Doctor Who, and its fans, seen through the eyes of two people – one who knows almost nothing about the programme and another who knows way too much.

‘This is a very, very funny book; touching too.’ Jenny Colgan

All Doctor Who fans and their spouses should buy this book. It will save them years of expensive therapy.

Affectionate, accurate and funny - you will want to be their friend.

Hysterically funny and also surprisingly moving, it's a definitive celebration of how fantastic Doctor Who is, even when it's a bit rubbish.

Neil Perryman's book is simply a delight - the genuinely funny and rather moving memoir of much more than an obsession. Anyone who has been a child, or tried to make a relationship work, or been embarrassed by a personal passion will find much to love. And if you know what a zeus plug is, or how to reverse its polarity, then you'll be happy, too.

If ever a TV programme needed the **** taken out of it lovingly, it was Doctor Who. Now the show has its Siskel and Ebert, its Statler and Waldorf, its Beavis and Butthead. Even non-Whovians will love this book. I certainly did.

Neil Perryman fell in love with Doctor Who when he was 3 years old and 40 years later, he still can’t stop thinking about it. Neil has also been responsible for a number of popular websites over the last 10 years, including ‘Tachyon TV’ and ‘Behind the Sofa’ (which is still listed under The Guardian‘s TV & Radio blog’s “Site… 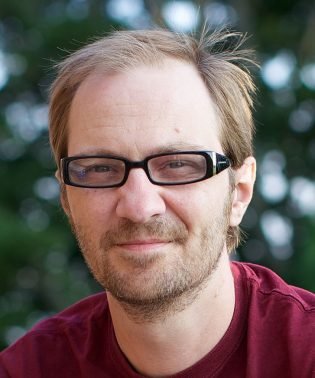 First published in 1985, Miles Gibson’s phantasmagoric second novel returns to print with a new preface by the author. Wreathed in…