The brilliant and essential guide to the award-winning director of Days of Heaven and Badlands.

Format
Ebook
ISBN
9780571278046
Date Published
22.12.2015
Delivery
All orders are sent via Royal Mail and are tracked: choose from standard or premium delivery.
Summary

Terrence Malick’s debut film, Badlands, announced the arrival of a unique talent. In the 40 years since that debut, Malick has only made 5 films, but they are distinctive in their beauty.

This book is not meant to be a biography of Terrence Malick. The purpose behind the book is to introduce readers to the extraordinary universe of his film-making and to aid them in understanding his work. And to do this through the words of his closest collaborators – cinematographers, set designers, costumers, cameramen, directors, producers, and actors such as Sean Penn, Martin Sheen, Sissy Spacek and Jessica Chastain. As their words flow from one to another, they form a fascinating, kaleidoscopic vision of American film and specifically Malick’s artistic world. who make up a film.

This book is the fruit of a journey began years ago when Luciano Baracaroli, Carlo Hintermann, Gerardo Panichi and Daniele Villa made a documentary on the work of Terrence Malick, which led to the making of this book as well.

Daniele Villa, Carlo Hintermann, Luciano Baracaroli, and Gerardo Panichi worked together in the Italian publishing house Ubulibri under the guidance of the late Franco Quadri. After having edited books on Otar Ioseliani, David Lynch and Takeshi Kitano, they chose to make a documentary about Terrence Malick since his films served as a prism through which they could view American cinema.They… Decalogue, The Double Life of Veronique and his trilogy, Three Colours, earned Kieslowski his reputation as a world-class film-maker. Kieslowski was… 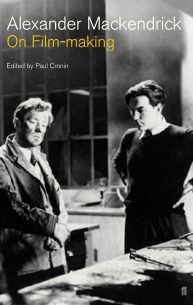 Alexander Mackendrick’s On Film-making is a masterclass in film-making from the acclaimed director of Whisky Galore and The Ladykillers.

In Werner Herzog – A Guide for the Perplexed: Conversations with Paul Cronin, the award-winning director of Grizzly Man and Fiztcaraldo…