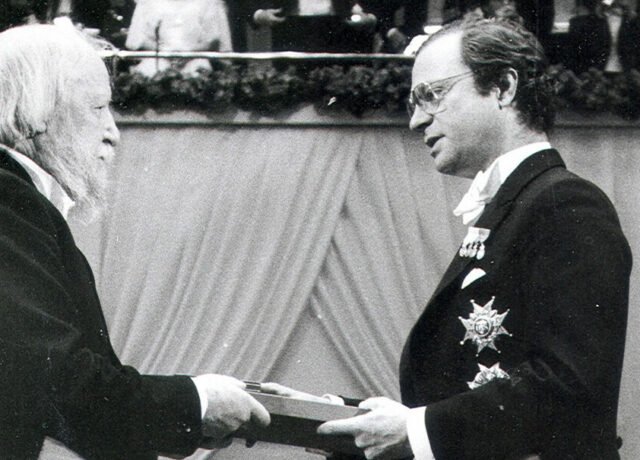 This morning at ten o’clock, Ingmar whatsit rang from Stockholm. He then
mysteriously talked about a phone call I ‘might’ get in a couple of hours’ time and
went on to say it was a fifty/fifty chance that I would get the Nobel Prize! It is an
example of thoughtless selfishness that he should try to get a foot in the door by
inflicting a couple of hours anxiety, then a probable disappointment on me. That is a
journalist all over. He is getting his foot in the door. How thoughtless can you get? I
am shaking with a quite unnecessary excitement – no I’m not. I’m dismissing the
idea and being calm . . .

At five past one the news was on radio and television – I’ve won the Nobel prize.
After that the phone’s been on all day. I went riding, having left Ann in charge of the
phone but when I got back to the stables the television people were there. Then
more television and photographers and journalists turned up. It’s about ten o’clock
and the last lot of Swedish journalists have just gone. On the news a Swedish judge
from the Nobel jury disagreed violently and said I was a small British phenomenon of
no importance . . .

I am struggling to keep riding afternoons free since that is sanity. I have, they say, to begin thinking of my speech at Stockholm. I shall distinguish between other realms and literature and explain how subjective and delicate the decision must be. Another panel might well have chosen another author.

After that it will be pessimism (horizontal) and optimism (vertical.) That should be enough to keep everyone happy.

Last night we took the phone off the hook and went to the Crown at Alvediston & had a lengthy, calm meal. I broke my determined abstinence and shared a bottle, I mean carafe, of white wine with Ann. The only note taken of us was that the publican, acting as waiter, murmured ‘congratulations’ as he served us.

Lundquist has retracted what he said and declared Bolonius [WG’s nickname for himself] worthy of the prize. He was, they say, provoked by journalists.

Now, having written more than thirty letters of thanks I’m watching the Oresteia, which is a rather humbling experience. I feel like the Roman Emperor who facing his triumph had a slave whispering in his ear – Remember you are mortal.

Camilla [WG’s guide and temporary assistant from the Nobel organisation] will get the lecture properly typed twice: and then a copy blown up so that I can read it without having to wear spectacles. An idea has come to me: namely that I can go down as deep as anybody over the question of pessimism and optimism. Another strand is that of mysticism which I would point out is presented in an organised fashion but which occurs so to speak, in nature with considerable irregularity.

Isaac Bashevis Singer says the power of religion, belief in revelation is weaker than it was in any other epoch in human history. I have the temerity to doubt this and could cite the experience of my father who called himself an atheist because he could not believe in the cruel God that was presented to him by sectarianism and chose instead the dry, the indifferent universe of rationalism which was the only other belief available to him. He was thus, a profoundly religious man who remained a grieving atheist until the last days of his life.

[In Stockholm] Last night’s lecture went about as well as it could, given the fact that everyone who wanted a copy had it on their knees and was following word for word. As all the pages were turned together the noise was deafening. Afterwards we went to the house that belongs to the academy where we had dinner. It contained salmon and a reindeer steak. Reindeer is rather good. However, we came away soon after nine and came back to the hotel. There we actually sat up and watched a restful programme called William Golding which contained a great many pictures of the sea and plenty of impenetrable Swedish. All I could understand was what I said myself. However today I must say I have a feeling of great relief at got over that hurdle.

[Home again] This morning David and I went into Salisbury and bought some presents – one for him, and one each for the little boys. I have Ann’s. I think the Nobel Prize is enough for me. In the afternoon I put up the eleven danglers for the [Christmas] lights, so really we are not doing too badly. From the Archive
Read More Joe Dunthorne in the Faber Archive