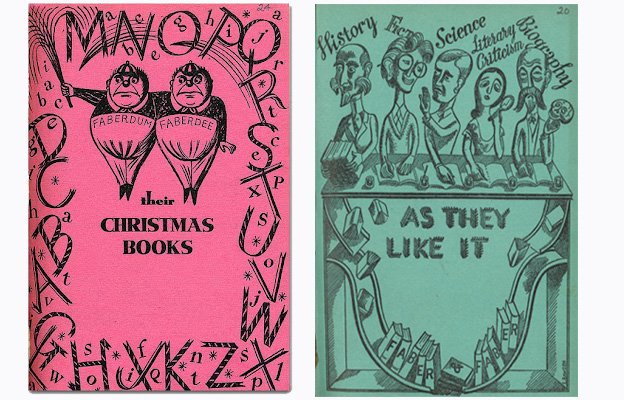 In the early 1930s one of the most versatile young designers used by Faber & Faber was the then unknown, but later highly regarded artistic figure, Edward Bawden. His first commission for the firm was the artwork for a classic cookery book taken on by the firm in 1932: Good Food by Ambrose Heath. It involved Bawden in producing a large range of ‘decorations’ of the food and farming characteristic of every month of the year.

His light and witty style was greatly admired by Richard de la Mare, Faber’s production director (and son of the writer, Walter de la Mare) and led to a spate of commissions for other F & F book jackets. Two of his finest designs, however, were not for books, but for special Christmas numbers of Faber’s sales catalogue. The cover of the first of these, for Christmas 1932, was a graphic representation of the subject areas which the firm’s books covered; namely, History, Fiction, Science, Literary Criticism and Biography. One’s eye is caught by the man on the right holding a skull!

Undoubtedly the most striking cover that Bawden executed for F & F, however, was for the following year’s Christmas books special number. This featured ‘Faberdum and Faberdee’. It is a playful use of the Faber name; and the depiction of the duo, with their tiny caps, large collars and oversized waistlines is amusing in itself.   However, Bawden is paying affectionate tribute to one of the great Victorian illustrators; for ‘Faberdum’ and ‘Faberdee’ are, in all but name, entirely based on two of the celebrated characters – ‘Tweedledum’ and Tweedledee’ – that Alice meets in Lewis Carroll’s Through the Looking Glass (1871). As illustrated in that edition by Sir John Tenniel, the identical twins, are notoriously bellicose, but cowardly when faced with danger.

It is a fitting, literary-inspired, cover for the 1933 Faber Christmas books pamphlet, which was special in other ways too, filled as it was with jokes about Faber staff. For this was an A to Z of the best of Faber, each section of which was prefaced by two lines of humorous verse, written by one of T. S. Eliot’s younger editorial colleagues. The latter clearly had licence to jest, as the list of Eliot’s works were headed by the following tongue-in-cheek lines:

E is for Eliot, a very stern man,
His prose is severe, and his poems don’t scan.