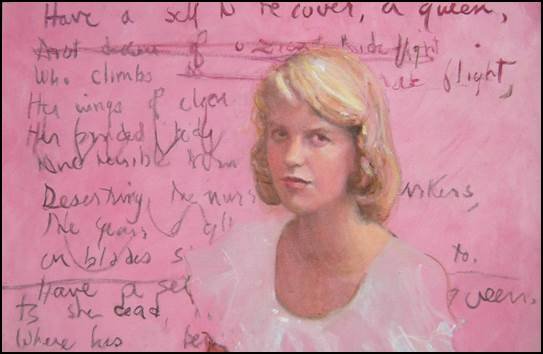 The Fires of Heaven and Hell: Sylvia Plath’s ‘Fever 103°’ From the birth of her daughter to a cut thumb, moments described in Sylvia Plath’s letters become those that enliven her poems. The Letters of Sylvia Plath Volume II: 1956–1963 sheds new light on the composition of many of Plath’s Ariel poems. In the case of ‘Fever 103°’, Plath’s correspondence with Paul and Clarissa Roche chronicles the poem’s development. As a result, we begin to see the poem as the outcome of both a fever and a friendship, revising words and images that had lingered in Plath’s imagination and in her letters.

Sylvia Plath returned to Smith College in the fall of 1957 to teach Freshman English. Among her colleagues was the poet and novelist Paul Roche renowned for his thirty-two-year friendship with the Bloomsbury artist Duncan Grant. On 27 February 1958 Roche read from his unpublished reminiscences of Virginia Woolf in Neilson Library. An article in the Smith student newspaper, The Sophian, reported that Roche described Woolf as a ‘disheveled angel’ and noted that if ‘she were portraying you in a distasteful light in her present novel, she was likely to be rude to you for weeks.’ Plath and her husband, Ted Hughes, were in the audience.

Roche had met Grant in 1946 and modeled for him almost continually for the next eight years. The first sketch by Grant that Roche saw was his design of a monkey for Wu Ch’êng-ên’s work. Years later, Hughes selected a quotation from his copy of Monkey to adorn Plath’s gravestone: ‘Even amidst fierce flames the Golden Lotus can be planted’. The first flower mentioned in literature is the lotus, which in China came to symbolize perfect truth and purity and was associated with the Buddha himself.

Roche was also known for his translations of Greek dramas. On 21 May 1958, Hughes read the part of Creon in Roche’s translation of Oedipus the King at Sage Hall. According to Plath, Hughes read ‘the last line with the expression of a limp dishtowel’ (Journals, 388). Years later, Roche speculated in a 27 June 1999 letter to his friend Michael Kraft that Hughes read poorly because he despised Roche’s translation:

What he did not know is that in my translations of Greek drama I do not use it as a vehicle for my own invention. I try to keep as near to the Greek as I can, spurning every brilliant ‘improvement’ if it is not in the original.

In the same letter to Kraft, Roche speculated that Plath’s problem was that she had to be perfect in everything: ‘the perfect daughter, the perfect student, the perfect teacher, and the perfect wife’.

When Plath and Hughes moved back to England in December 1959 they kept in touch with Paul Roche and his American wife, Clarissa, and their children—Pandora, Martin, Vanessa, and Cordelia. Between 2010 and 2017, Pandora Roche Smith discovered two caches of letters that Plath wrote to her parents from Court Green in Devonshire in 1962 and from 23 Fitzroy Road in London in 1963. These letters, now at Smith College, are included in volume 2 of the Letters of Sylvia Plath.

Paul Roche received a Bollingen Fellowship in 1958 to study in Greece for a year. In Plath’s first letter to the Roches on 12 March 1962, she writes that she is envious of their time in Greece without children. Plath was suffering from chilblains and felt stuck in the country with a new infant ‘and very broke with piles of necessary house repairs’. She ends the letter with news of her novel The Bell Jar , funded by a Saxton fellowship: ‘I am nearly done with a quite grossly amateur novel the small grant for which is enabling us to live with less desperation than usual’.

Plath’s next letter on 11 July 1962 describes a summer drought in which she and Hughes lift the lolling heads of their ‘otherworldly plants’ and beg them to ‘hang on.’ Then, on 19 October 1962, Plath startles Clarissa with news about the breakdown of her marriage to Hughes and her own poor health:

I am at present totally without access to friend or relative and have been stupidly ill, lost a lot of weight & am running a flickery 103° fever, getting up each morning at 4 a.m. to write, my one quiet time. Paul Roche received a Bollingen Fellowship in 1958 to study in Greece for a year. In Plath’s first letter to the Roches on 12 March 1962, she writes that she is envious of their time in Greece without children. Plath was suffering from chilblains and felt stuck in the country with a new infant ‘and very broke with piles of necessary house repairs’. She ends the letter with news of her novel The Bell Jar , funded by a Saxton fellowship: ‘I am nearly done with a quite grossly amateur novel the small grant for which is enabling us to live with less desperation than usual’.

Plath’s next letter on 11 July 1962 describes a summer drought in which she and Hughes lift the lolling heads of their ‘otherworldly plants’ and beg them to ‘hang on.’ Then, on 19 October 1962, Plath startles Clarissa with news about the breakdown of her marriage to Hughes and her own poor health:

I am at present totally without access to friend or relative and have been stupidly ill, lost a lot of weight & am running a flickery 103° fever, getting up each morning at 4 a.m. to write, my one quiet time.

The next morning Plath sat down and wrote the first draft of ‘Fever 103°’ in the dark, as she told Clarissa, as if ‘writing in a train tunnel, or God’s intestine’. Plath composed six drafts of ‘Fever 103⁰’, now preserved at Smith College. They are all dated 20 October 1962, even though some of them bear edits after her interview with Peter Orr of the British Council on 31 October. On the fifth draft, Plath deletes references to the men of the Inquisition even though she read this stanza on 31 October and it was one of her favorite passages:

Sit with their hooks and crooks and stoke the light.

Plath clearly edited her poems over a few weeks, but always associated each title with its moment of conception. The last version of ‘Fever 103°’ was typed on 13 December 1962 and included in her final typescript of Ariel and Other Poems. She sent a draft of ‘Fever 103°’ to Poetry magazine on 23 November 1962 and it was published in August 1963 with her poems ‘Purdah’ and ‘Eavesdropper’ after her death.

At the beginning of ‘Fever 103°’, Plath asks what it means to be pure. According to her Webster’s dictionary it is to be free of stain or from what pollutes, to be chaste. In her own statement about the poem, Plath says: ‘This poem is about two kinds of fire—the fires of hell, which merely agonize, and the fires of heaven, which purify. During the poem the first sort of fire suffers itself into the second.’ By the end, the narrator has reinvented herself. Her body has burned out the infection and she is pure; but, unfortunately, too pure for this world. 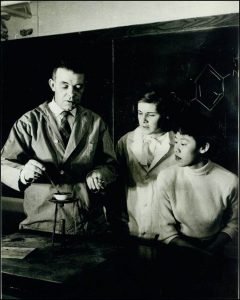 Like many of her Ariel poems from this period, it is written on the back of a discarded draft of The Bell Jar. In chapter three, Plath describes her hated science class with Dr Wayne Sherk in the spring of 1953—The World of Atoms. The last chapter in Plath’s textbook for the course was on ‘Nuclear Fission and Atomic Bombs’. Images of ‘Hiroshima ash’ in ‘Fever 103°’ may harken back to this class.

During the same semester, Plath took Medieval Unit with Dr Howard Patch in which she read Boccaccio, Chaucer, Dante, and the Confessions of Saint Augustine, in which God is characterized as a ‘consuming fire’. According to the class description, ‘lantern slides were used to illustrate the development of the plastic arts’. Paintings of the ascension of the Virgin Mary were juxtaposed with the stake-burning of heretics. Early editions of The Divine Comedy, which Plath consulted in the rare book collection at Smith College, describe Dante’s journey through Hell (Inferno) and Purgatory to Paradise (Paradiso). Dante’s work is certainly one of the models for the imagery in ‘Fever 103°’. The three realms, the Trinity, and the number three are prominent in The Divine Comedy like the tercet structure of ‘Fever 103°’. In Hell, Dante encounters a laundry list of sins like adultery and gluttony, hence the lines in ‘Fever 103°’: ‘eating in / The sin. The sin.’ Purgatory contains the excommunicated from the church. Immediately prior to a heretic’s excommunication and execution by burning at the stake, a candle is extinguished, like the image in ‘Fever 103°’ of ‘the indelible smell / of a snuffed candle’. The Divine Comedy ends with Dante’s ascension to Paradise, cleansed of sin, which is similar to the movement in ‘Fever 103°’.

In a script that Plath composed for Douglas Cleverdon at the BBC about her Ariel poems, Plath wrote: ‘These new poems of mine have one thing in common [ . . . ] they are written for the ear, not the eye.’ ‘Fever 103°’ is filled with the ‘ee’ sounds of a tormented narrator. The following words populate the poem: mean, clean, spleen, me, meek, weak, greasing, eating, sheets, three, beaten, and acetylene. Like the patient in Virginia Woolf’s essay On Being Ill, Plath ‘crushes together [her] pain in one hand, and a lump of pure sound in the other’ to produce a brand new description of suffering in ‘Fever 103°’ that rises to mysticism by the end of poem.

The Roches visited Plath in Devon on 17 November 1962. In preparation for the visit, Plath asked Clarissa on 25 October 1962 to bring a translation of Sappho, saying ‘I must read her—a fellow lady poet!’ Plath turned her attention to women poets and women friends at the end of her life. She wrote to Stevie Smith and Ruth Fainlight and dedicated The Bell Jar to her Devon neighbours, Elizabeth and David Compton.

After Plath moved back to London, she saw the Roches on 3 January 1963. In her last letter to Paul and Clarissa on 9 January 1963, she thanked them for making her tea on 3 January 1963: ‘I really thought I was dying & began having blackouts that night while the two babies later ran scalding fevers. My very wise and kind doctor got me a private day-nurse for 10 days or I don’t know what I would have done’. Clarissa annotated this letter to read: ‘She was so alone in England and when she was weak & ill no one really cared. That day I went & cooked for her no one else had been. There was 1½ feet of untrodden snow on the doorstep. The door was covered & it was difficult to open. She was literally isolated by the cold of English feeling’. Once Sylvia recovered from her fever, Clarissa suggested they see King Lear with Duncan Grant who was notoriously life-affirming and inspiring, but Plath committed suicide on 11 February 1963 before this restorative outing could materialize.

Volume II of The Letters of Sylvia Plath documents sources of inspiration for many of Plath’s late poems and the evolution of her unique and powerful voice. It is truly extraordinary to be able to trace the creative process of a revolutionary twentieth-century poet like Sylvia Plath in this kind of detail through unabridged journals and letters published by Faber & Faber, and by examining Plath’s original literary manuscripts preserved and fully accessible in American and British libraries. 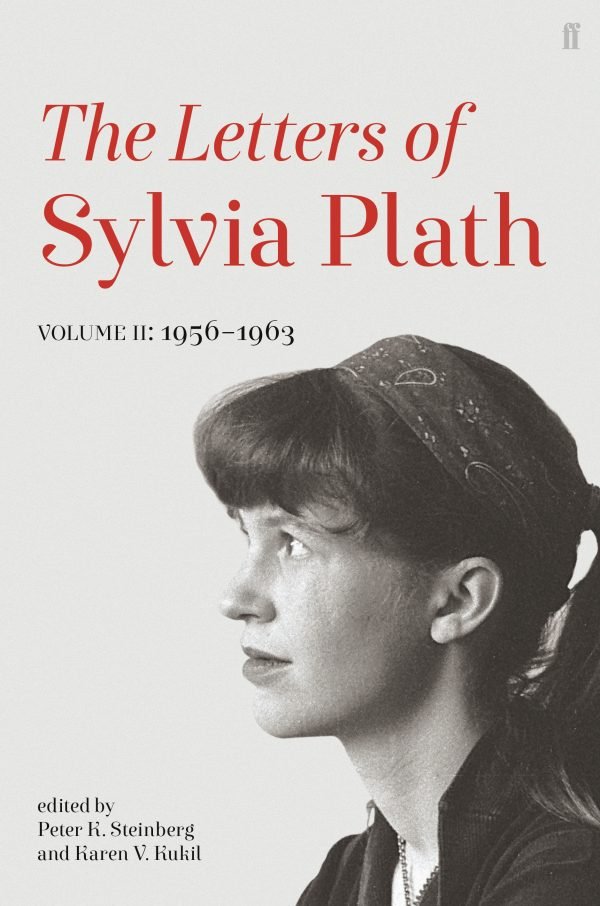 The second, and final, volume of this landmark edition of Sylvia Plath’s correspondence.