Our latest ‘Disposable Diaries’ comes from Willy Vlautin, author of The Motel Life, Northline, Lean on Pete and The Free. His writing is often praised for giving a voice to unexpected characters with Los Angeles Review of Books calling him ‘the patron saint of the underdog’. The Portland-based author has the ability to capture the essence of contemporary America, as exemplified by the two novels that have been adapted for the screen: The Motel Life in 2013 and Lean on Pete, directed by Andrew Haigh and released last year, starring Chloe Sevigny and Steve Buscemi.

Don’t Skip Out on Me is his latest novel and is the story of Horace Hopper, a young farmhand who dreams of becoming a professional boxer. His journey to fulfil this goal takes him to the boxing rings of Mexico and the streets of Las Vegas, where a beautiful and wrenching story of one man’s search for identity and belonging unfolds. In this photo series Vlautin sets the scene of the novel, as well offering a glimpse of his own writing set up.

Over to Willy, who describes the photos in his own words…

‘My favourite photo of Tonopah taken by Bryan Schutmaat. This is the town where Horace Hopper lived with his grandmother from age 8 to 14.’

‘Gabriel Liston is a great illustrator and painter from Portland, where I live. For a while we were thinking about illustrating the novel. Here is an early page of sketches of two of the characters Horace and Mr Reese.’

‘Horace got down from the ring and walked past the spectators, the boxers, and the parents, and for the first time in his life, he didn’t feel like an outcast or a failure. He didn’t feel like a misfit, he didn’t feel off or defective. Finally, after so much work and heartache, Horace Hopper was leaving him. He was being cut away and left to disappear into nothingness. He had the trophy in his hand and the respect of the people in the room. He had won.’  From Don’t Skip Out on Me

‘This is the inside of a Food City in Tucson, Arizona. Horace had never really been outside of a town of 2,600, and then suddenly he finds himself in a large city. The store, like Tucson itself, is exotic and overwhelming.’

‘Most days I write with my editor, Myrna Loy, just staring at me. She can be tough,  some of the things she says about my writing, Jesus . . . But at the end of the day, she always tells me I’m her main man and to go across the street to Slims and have a tequila and a beer.’

‘This hopefully shows a bit of how remote the Little Reese ranch is. Horace and the Reeses live a life of isolation in the high-desert of central Nevada.’

‘Here’s a picture of my office and my guitar. The poster of the Pogues I’ve had since I was seventeen. I wrote a lot of the soundtrack songs on that guitar, and most of the novel in that room. The couch is for when I get stuck on a story or a song, so I’m there a lot.’

‘There are wild horses everywhere near the Little Reese ranch. Their fate is a huge debate in Nevada and in the West in general. I don’t have the answer. but there’s something just so damn beautiful and sad about seeing them in the wild. They’re breathtaking.’

Don’t Skip Out on Me is available in paperback from 17 January. 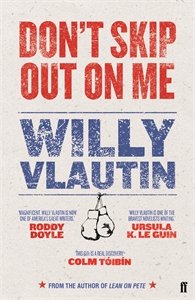