One morning in May 2021, I awoke from a vivid dream in which a mysterious Senior Designer from the UK’s biggest independent publisher commissioned me to work on what would be the non-fiction book of the year. I sat up in bed, trying to collect my thoughts, when the phone rang.

‘Jack, this is Pete Adlington, Senior Designer at Faber & Faber, the biggest independent publisher in the UK,’ the gritty voice replied. ‘I have a brief for a book I’d like to commission you to work on – it could be the non-fiction book of the year!’

Not really though. I have the pleasure of working with Pete Adlington quite a bit, and when he got in touch with the brief for The Premonitions Bureau, it was evident that this was going to be a great project. The book centres around British psychiatrist John Barker who, after the Aberfan disaster of 1966, established the Premonitions Bureau — an organisation which collected the nation’s premonitions, building a database intended for public use. This would help us to avert future disasters: warning us of earthquakes and fires, making us think twice before boarding particular planes or trains on certain days. The premise alone was intriguing, and the brief was really exciting, full of ideas and possible directions. It really gave a great feel for the book without being too prescriptive, which is a tricky thing to do. Starting with a premonition

As is sometimes the way with a title as good as this, I had an initial idea I wanted to try. Concentrating on the ‘premonitions’ of the title, I tried to visualise this idea through type alone. I wanted the title to sort of manifest itself, the letters of the word ‘premonitions’ extrapolating and fractioning off before the ‘r’ and ‘e’ led onto the word ‘bureau’.

I printed the title out multiple times and got going with the scalpel, achingly placing the letters on top of each other to try achieve the idea. I took a few pics and sent them on to Pete, who discussed them with the publisher, and they suggested that the approach was a bit too familiar in the non-fiction genre, a bit too safe, and they were dead right: it was one of those things where the idea is better than the reality.

At this point they sent on an early pass of the manuscript along with a wealth of photos that the author, Sam Knight, had sourced for the internals. We had discussed the cover having a sort of mid-century feel (appropriate for the timeframe the book examines), but we wanted to make sure it still felt contemporary.

The photos were a treasure trove of odd black-and-white images of the Aberfan disaster, scientific diagrams, brain scans, maps, newspaper articles and all sorts of strange images. I was really struck by the case study of the Aberfan disaster, in which a colliery spoil tip collapsed, causing a mudslide that killed 116 children and 28 adults, as discussed in the book. It seemed like the case to focus on, and there were some brilliant photos from the time, of a father walking his children to school and of a few silhouetted people atop a hill surveying the damage, amongst others. Picture with a twist

I wanted to take some of these images and subvert them in some way. The idea was to take an image and give it a twist that suggested premonitions or something a bit odd, but looking at them now, I don’t think I achieved this. Retrospectively I now think that playing with imagery of such a horrible accident was the wrong route entirely – it’s insensitive and now feels very heavy-handed. But that’s often part of the process – exploring routes that lead to dead ends. I still like the oval one with the crowd sort of oozing out of it, but it’s not right for this book, I think I just like ovals on book covers. The feedback from the in-house team was that these were too cold, too chilly, too intellectual, too arch, and the well-known Jon Ronson paperback covers by Crush Creative were given as a steer. This was very helpful as it opened the door for me to try more graphic or illustrative approaches. It’s a funny thing about the process – sometimes it just takes one or two small bits of feedback to change the course of the cover.

It was clear that I had been going in the wrong direction with this, and this was the point we started to get on the right track. I decided to try some routes that were bigger, bolder and more graphic and type-focused. I wanted to explore the idea of something being hidden or obscured, another message beneath the obvious one. 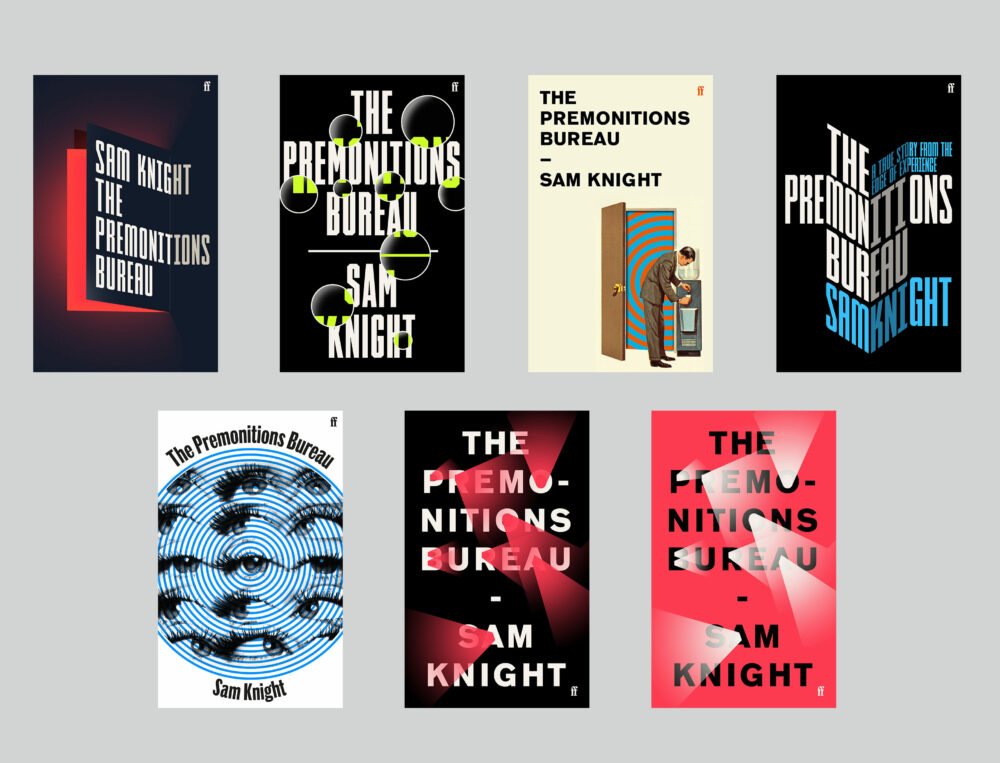 I really like bringing levels of depth or strange angles into book covers, and you can see quite a lot of that in this round. It can be great to do this and entice the viewer to interact with the visual puzzle they’re being presented with, but in the end they all still felt a bit cold. The direction felt right but the execution was off – this needed that physical, printed feel of a mid-century novel. It was like the photos that Sam Knight had sourced – they had an amazing old, physical quality to them that made the already strange images even more intriguing, and this was something we needed to incorporate.

The team shared some great reference visuals which were really helpful in steering me in the right direction (see below). You can really see the influence they had on the next round. 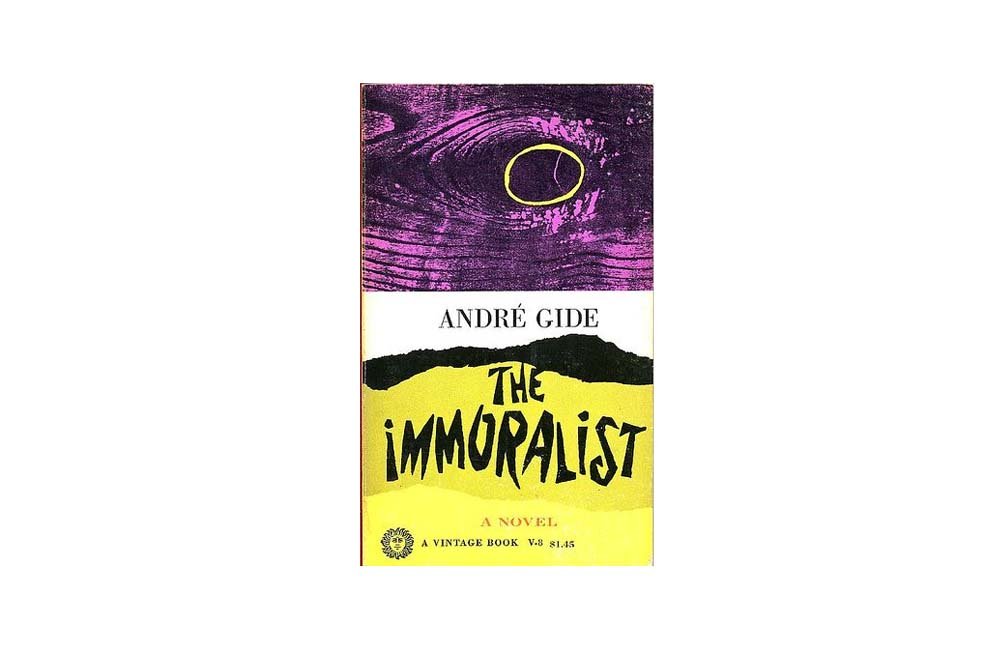 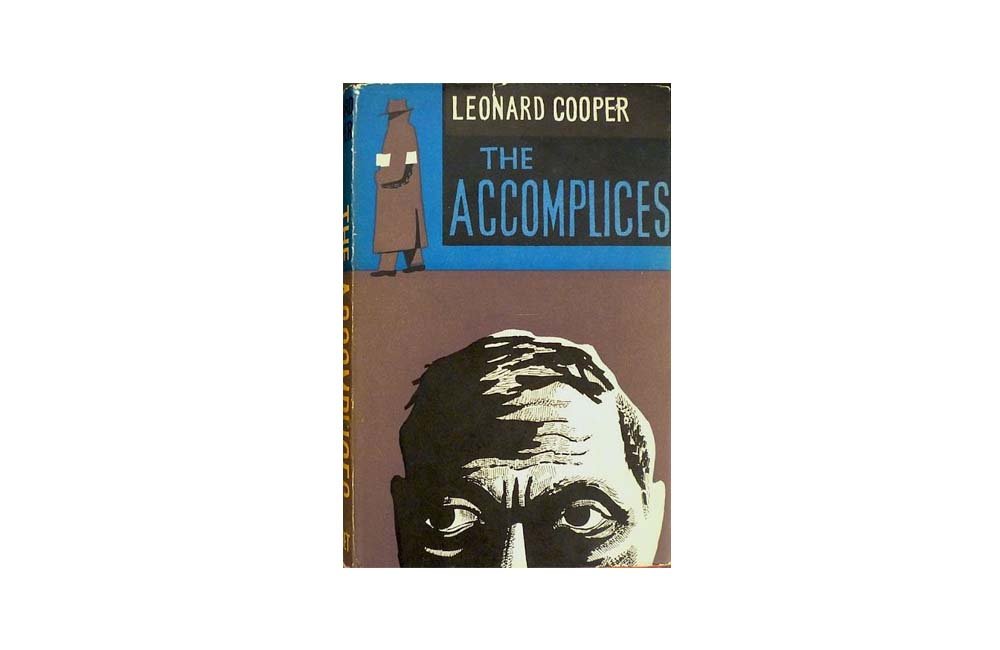 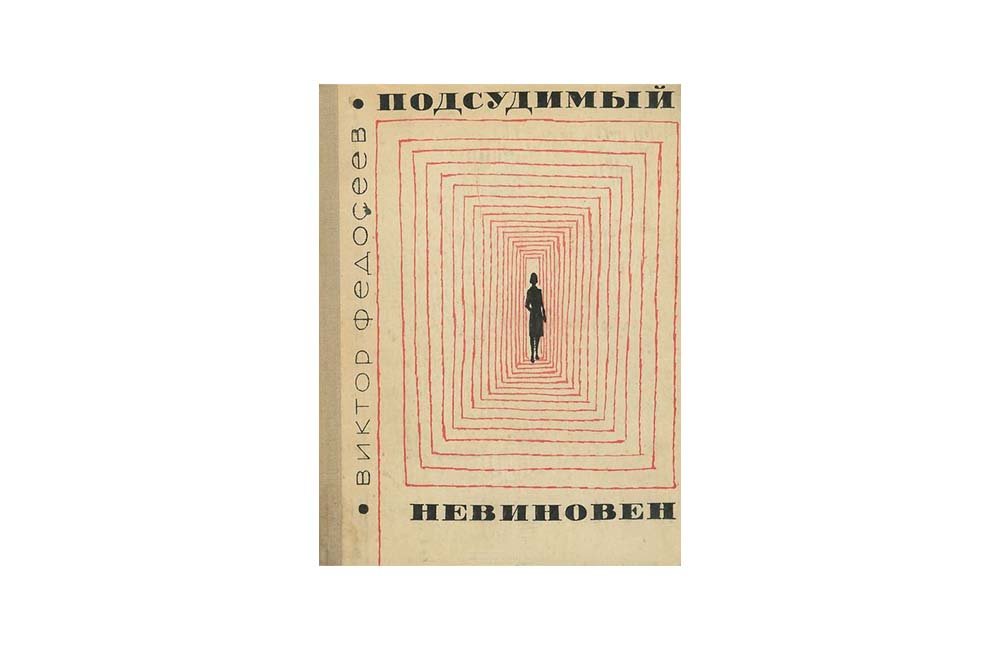 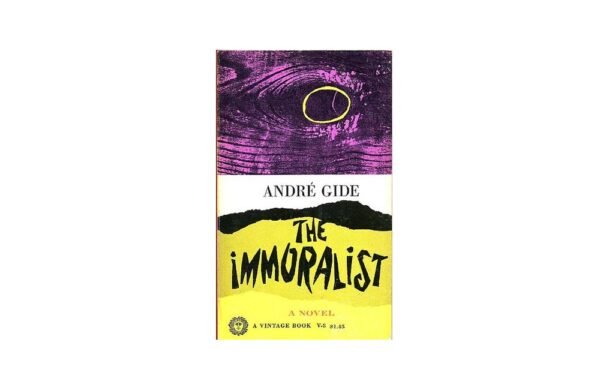 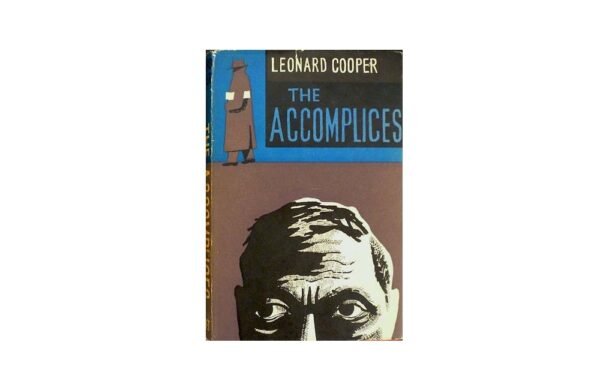 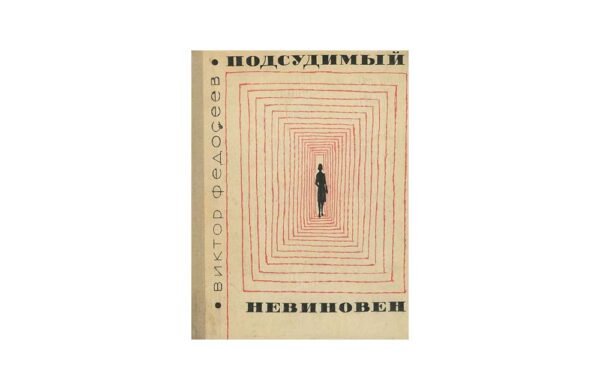 I moved more into the mid-century modernist realm, which immediately felt right. There’s a texture and imperfection to this era of design and illustration which really adds a wonderful quality and personality. It’s a fine line to walk in terms of using some of the graphic characteristics from this time without wandering into the realm of the pastiche. The aim was to capture some of the physical imperfect qualities of the misprinting, the imperfect lines and the bold compositions, but also keep it modern at the same time. They immediately felt very different as they had less of a ‘created on a computer’ feel.

This ended up being quite a large round as Pete and I tried variations of a few of the directions; it was one of those scenarios where it was useful to see all the options next to each other. You can see some of the type choices from the final cover starting to emerge here – the combination of the condensed font Roswell Four with that wonderfully squat and strange font Sporting Grotesque. I’ve always liked pairing fonts that sort of feel like opposites with each other, and I really liked how these two feel in contrast to each other. At this point, the author was on board with the general direction of the angular blue graphic swirl, which meant that we had a main direction to pursue. Getting the details right

Now it really became all about the details – we had the Saul Bass-esque shape that we liked but we really spent a while getting all the elements just right. Sometimes these last decisions can really make or break a cover and I think this is a case where we really needed to work through all the options and whittle things down to the final cover. The very last touch was to make the type feel a bit imperfect, as if it was poorly set by hand in a rush, or perhaps that it was being pulled and manipulated by the background. I think the final cover is the right one for the book, and we were able to print it with two pantones and black on uncoated stock. The pantone inks keep it vibrant and the uncoated stock is a nice nod to the midcentury influences it draws upon, while adding a slight mottled texture to the larger hits of ink. It’s one of those covers where if you describe it to someone, it sounds very simple – ‘It’s an eye in the middle of some squares,’ – but hopefully in reality it’s much more effective than it sounds. This comes down to all the care and focus on the details which went into the process from everyone involved. Looking back, I explored a lot of options, but it never felt like a slog or a trial because it all felt like the right process for this particular book. Sometimes a cover comes together very quickly, and sometimes it needs much more exploration and experimentation. In the case of The Premonitions Bureau, the process was a long one – we worked on it from May to October and tried many different routes, but it feels like that was a necessary process and one that, to my eye, created the right outcome. 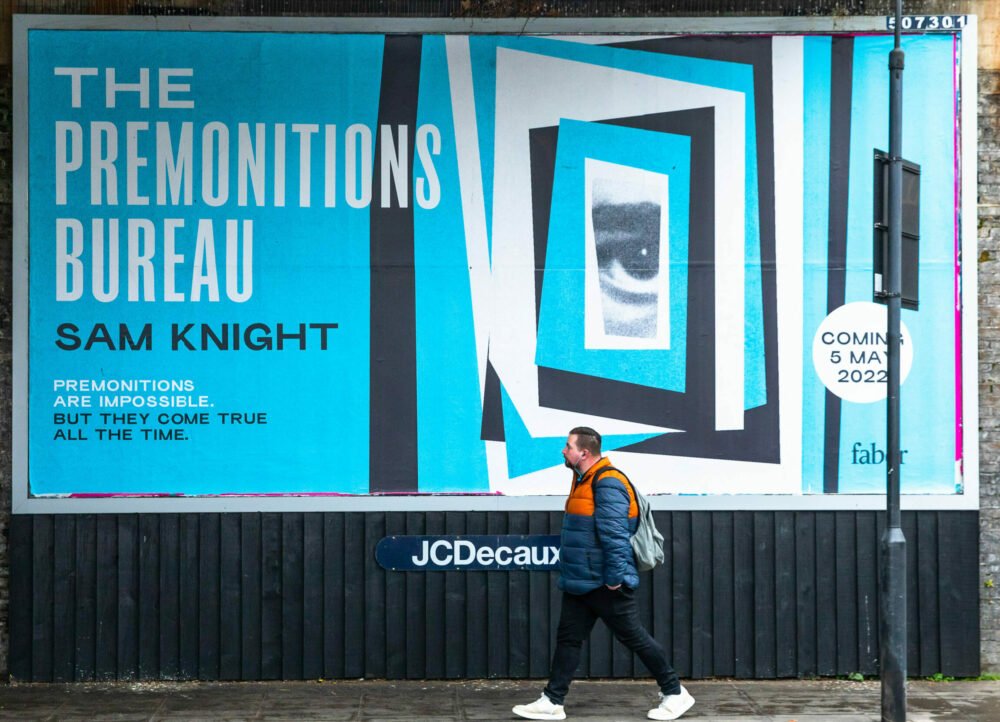 The cover of The Premonitions Bureau was art-directed by Senior Designer Pete Adlington and designed by Jack Smyth.

The book was published in May 2022 and is available in hardback.

For more in our Cover Design series, we recommend: 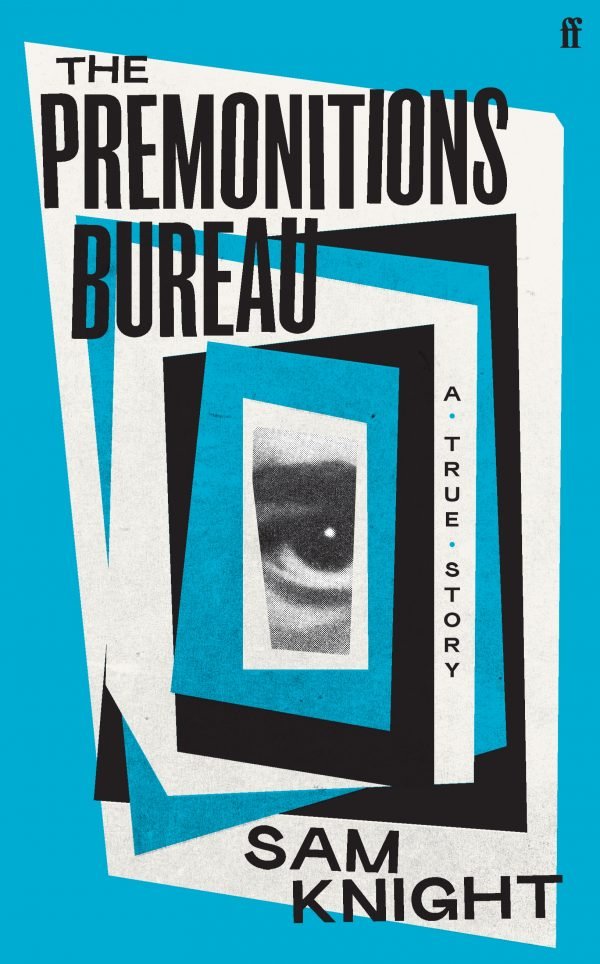 The story of a strange experiment – a journey into the oddest corners of 60s Britain and the outer edges of science and reason.

Sam Knight is a British journalist who has covered subjects such the plans for the death of the Queen, sandwiches and late capitalism, art fraud; plus profiles of Ronnie O’Sullivan, Jeremy Corbyn, and Theresa May. His work for the Long Read section of the Guardian and for The New Yorker has become influential and wildly shared. 'London Bridge is Down', published in 2017, was viewed 4 million times and remains the most popular Guardian long read ever published. Knight, a staff writer at The New Yorker since 2018, has won two Foreign Press Association awards 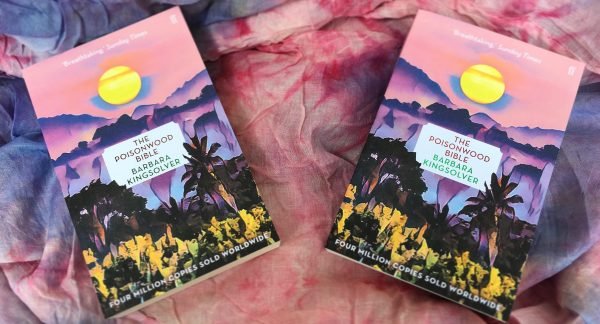