We talked to Children’s Art Director Emma Eldridge about the process of designing the cover for Marie-Louise Fitzpatrick’s stunning YA novel, On Midnight Beach.

When I started working on On Midnight Beach I made sure I read the story so I was very clear on what it was about and to get a sense of the characters and tone. It is a beautiful coming of age story that combines romance with thrilling action. It is set in Donegal in 1976 when they had one of the hottest summers since records began. A dolphin takes up residence in Carrig Cove and Emer and her best friend, Fee, feel like they have an instant connection with it. Then Dog Cullen and his sidekick, Kit, turn up, and the four friends begin to sneak out at midnight to go down to the beach, daring each other to swim closer and closer to the creature . . . Romance ensues between Emer and Dog. But, it’s not long before things turn sour. The fame and fortune the dolphin brings to their small village builds resentment amongst their neighbours across the bay who ‘steal’ the dolphin. Old rivalries return and mob mentality kicks in with fighting reaching a shocking climactic ending.

The story is epic and feels like an instant classic so we were keen to give it an iconic looking cover but with a human element. We felt strongly that the design should appeal to boys and girls and should avoid concentrating too heavily on the romantic themes in the book.

One of the difficulties with the initial designs was that we had a working title of The Dolphin War. It had previously been called Raid and then The Year the Dolphin Came. Using ‘dolphin’ in the title immediately conjures specific imagery and understandably steers ideas in a certain direction. Hence, some of the earlier visuals did include dolphins. We decided we didn’t want too much significance placed upon the dolphin even though it’s the original impetus of the story. The mention of dolphins gives the impression of a book that is meant for a younger reader. The book has adult themes so this would have been misleading. It soon became apparent that we needed to change the title for us to progress the cover.

The editor Alice Swan came up with the more intriguing and evocative title of On Midnight Beach. This gave a new focus for the design. In the back of my mind I wondered if one of the original concepts by StudioHelen, showing two figures sitting and looking out to sea, could work. It had been considered too romantic. I thought with the new title, a different typographic approach and showing four figures instead of two it could suggest friendship rather than romance. However, it still seemed to suggest teenagers pairing off romantically. I moved away from showing a group of figures and instead thought about  Emer, the central female character. One night she goes to the beach on her own to swim with the dolphin and this was a memorable moment in the book with the potential for an arresting image. I looked for different images of single female figures in water. The description was that she was Caucasian with long dark brown hair. I created lots of options which we narrowed down to our favourite three to present to the author: 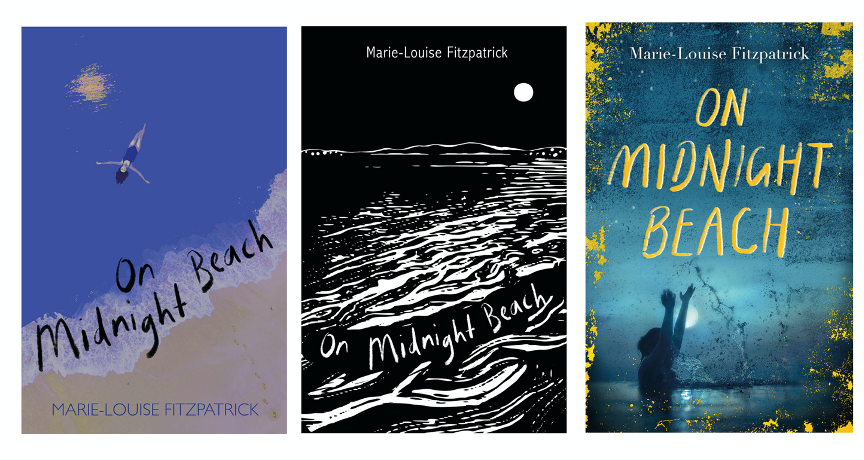 The author saw the most potential in the first option showing a figure serenely floating in the sea. I had come across this illustration on Instagram and thought it could be perfect. It was drawn by a designer-illustrator Robert Fiszer. I had to search and get in contact with him to see if it was possible to use the image. I needed to check I could get his permission, that it hadn’t been created for any other use and that it was available in a high enough resolution. Luckily he told me it was a personal work so fine to use. The cover is a composite of his illustration and two photographs from Shutterstock. The beach/sea photograph had to be turned from day to night and a moon reflection added to the water. Once this design had been chosen, I went about making the cover as strong as it could be, by looking at the colours and increasing the contrast in the image and working on the typography. There were obvious limitations in choosing the colour palette – the sea and sand still needed to look like sea and sand and it had to be night time without appearing too dark or dull! The final cover uses a special Pantone turquoise for the sand colour, which helps lift the cover making it striking and stand out. The gif below shows a bit of the visual journey we went on in making this cover.