This is London life as a young woman: working in a newsroom pre-lockdown, commuting from a rented flat to an office, a lunchbreak to eat some disappointing canteen soup, then willing away an afternoon of compounding humiliations before going to a terrible poetry reading and ending up in a pub. We experience all this through the thoughts of the book’s narrator, delivered in a kind of extreme present tense reminiscent of modernist fiction. In little scratch, as in life, there is no question of the mind being distinct from the material world. The two are tightly bound.

There is the outer world of photocopiers and the inner world of remembered memories. Both appear side by side on the page in columns. Sometimes these columns break their invisible walls and it becomes difficult to tell what is an event and what is an interpretation or recollection occurring at the same moment. It can even be difficult to say which of these worlds offer more freedom – the ‘real world’ of predatory bosses and thankless labour or the interior world in which trauma is continually resurfacing, unbidden. Leaving aside the mechanisms of the text itself, the book is mainly about the experience of being young, and being a woman, and due to both of these, being almost completely powerless. As I have never been a young woman myself, I thought it made sense to commission someone who might have more experience in this area.

My first choice was Lily Jones, whose collage and illustration seemed right for the more unsettling aspects of being coded female: the necessity of hiding one’s wounds; the sense of being observed without truly being seen; of being judged on terms that are almost never your own. Lily provided us with lots of extremely smart and compelling ideas. One route that gained traction early on was an emoticon. The colon and bracket, which would normally be rendered with mathematical accuracy on a screen, was instead painted by hand. But the ‘smiley’ had been further détourned by replacing what should be the upper dot of the colon with a photograph of the illustrator’s own mascaraed eye. Jones had made a ubiquitous and anodyne symbol troubling and strange. It seemed like a perfect reflection of the text. After trying several variations on this image, however, the author and editor felt it was a little too alienating. Despite being a tough book in some ways, little scratch is very relatable and strangely easy to read; it felt that the cover should be less raw and confrontational in order to appeal to the more casual reader. We paid Lily a kill-fee for the work she’d done and I was asked to come up with a different route. It is remarkably hard to answer the same brief a second time, especially when the first answer that was given still felt like the right one. (This is also how I account for the fact that I stole the idea of using copier paper from Lily.)

Time was no longer on our side, so I threw several approaches at the wall to see what would stick. A design with bits of the aforementioned copier paper, folded over to reveal the title and author name, was felt to be the most striking. But the same concern as before was raised: Is this too uncompromising? Too arch? Too mute? It was felt by many, including the author, that we needed an image. At the time, I had lots of misgivings about filling the space in the centre of the cover. To me, it represented the unspoken trauma at the heart of the book, as well as the featureless nature of a life centred around office work. Nevertheless, I tried quickly drawing the face of a woman over the top of it and was surprised to discover that I didn’t immediately hate it. The responses from everyone else were also largely positive. I’d rendered the woman in scribbles, as though she were composed of mindless doodles while on the phone or hasty notes from a meeting. It was peppered with lots of details lifted from the book. The consensus was that the approach itself was good, but the style was too busy. Also, the face looked old-fashioned; the hair was wrong and she should appear younger. A couple of redraws later we arrived at the cover. Somewhere along the way I crumpled up the paper. Sometimes you can’t do better than cliché, especially when it comes to the ‘texture of life’.

By this stage, lockdown had taken hold and I was working from home. This meant I no longer had easy access to a scanner. As a result, my intention to build the jacket in real life and then scan it in had fallen by the wayside. I was forced to work entirely within Photoshop, using only the elements I’d already scanned. Fortunately, one of these elements was also my favourite detail: an old Pret a Manger receipt fished from my coat pocket. My original plan had been to buy a lunch that came to £12.99 exactly, just so I could use the bottom of the receipt wholesale, where the book’s price should be. Yet another lesson in the importance of having plans, even if they invariably end up in the bin.

little scratch by Rebecca Watson was published on 14 January 2021. 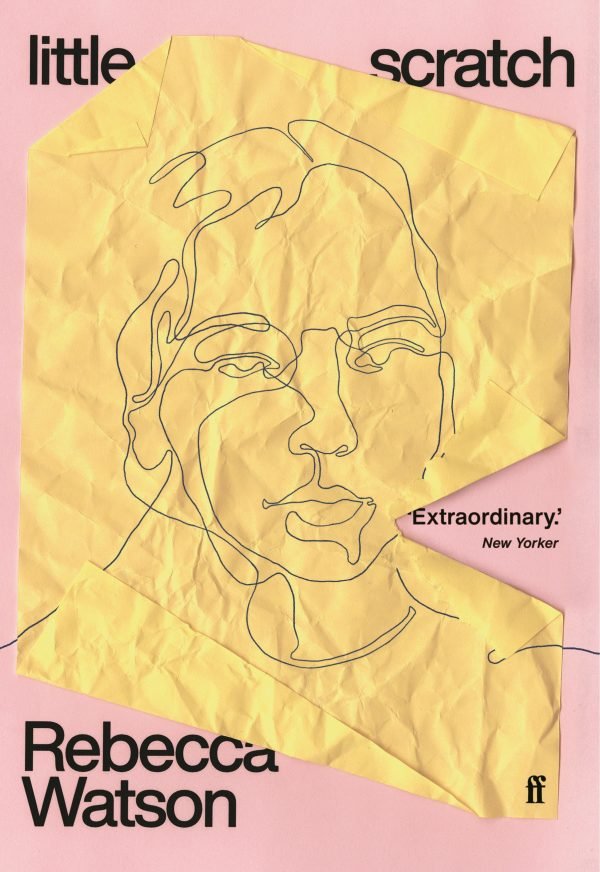 The explosive and virtuosic debut novel by one of the most talented young authors to have emerged in recent British fiction.