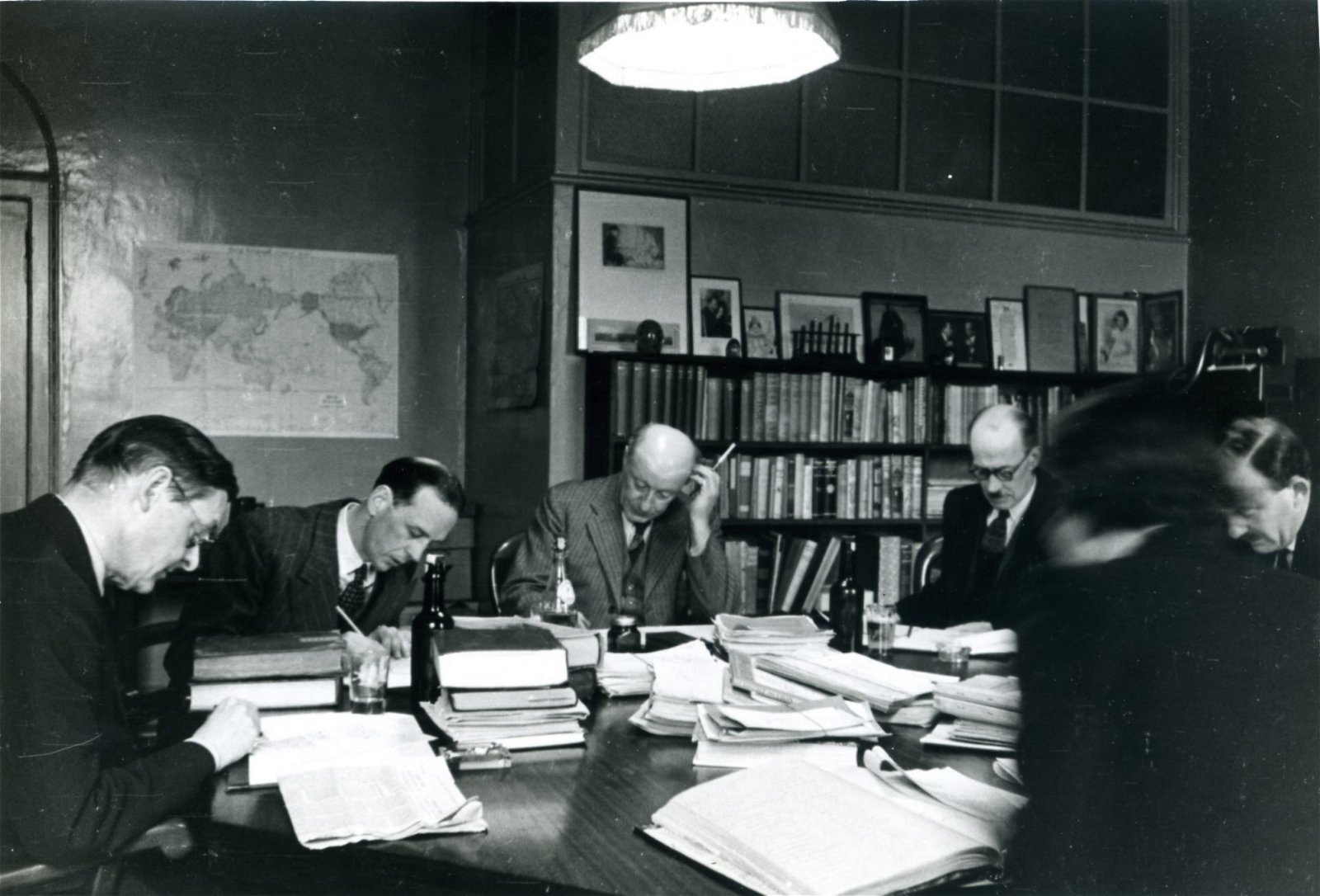 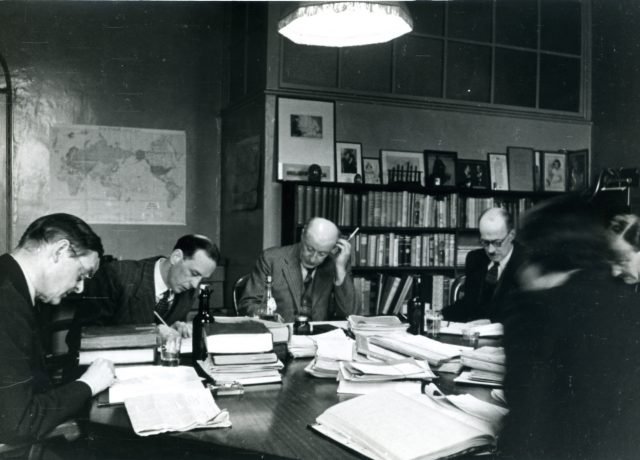 In the first years of the decade its literary commitment seemed as serious as ever. In 1950 it published Eliot’s The Cocktail Party, Auden’s Collected Shorter Poems, and Robert Lowell’s Poems, 1938-1949. The next year saw The Letters of Ezra Pound 1907-1941, a reprint of Pound’s The ABC of Reading, and, an early sign of an interest in literary criticism, Hugh Kenner’s The Poetry of Ezra Pound.

In 1953 Faber produced the first volume of poetry by Wallace Stevens published in Britain, his Selected Poems. In 1955, the year after its appearance in the US, came his Collected Poems. In 1954 there was Eliot’s The Confidential Clerk, already staged in London, and Pound’s Cantos finally collected up. There were also some ambitious projects of poetic translation: the spring/summer 1951 catalogue announced a new Oedipus Rex, by Dudley Fitts and Robert Fitzgerald, and versions by Louis MacNeice of The Agamemnon of Aeschylus and Goethe’s Faust.

Decisions about book proposals continued to be made by the Book Committee, which still used a system that required everyone to read and respond to the comments of other members. Each member would have read a report on every book. A standard bright yellow form was circulated to record everyone’s thoughts about the prospects for every single proposed publication. The process seems to have generated a special sense of collective purpose. Meetings took place in the board room. Members sat round a huge octagonal table and each reported on his special assignments.

Looking back from today, these meetings do have a ‘collegiate’ air. Lunch was cooked by Mrs Lister, wife of the resident caretaker in 24 Russell Square, and was served at one o’clock, preceded by the drinks tray. Usually Eliot would arrive just in time for a dry martini or a stiff gin. Charles Monteith liked to call this Book Committeee lunch ‘the family meal’. Until the late 1950s, all those on the committee were men. Rosemary Goad would eventually join the committee, but as a secretary taking the minutes in the mid-1950s she, like her predecessors, would have to withdraw to leave the members to their repast. (In the mid-1960s women at Faber were still not allowed to wear trousers or smoke at meetings.)

Though Faber & Faber was peculiarly close-knit, none of T. S. Eliot’s fellow directors seems to have guessed at the part the company would play in his private life. One day in 1957 they arrived for work to find the announcement that Eliot had married his secretary Valerie Fletcher that very morning. It was as complete a surprise to her fellow secretaries as it was to his fellow directors. Valerie Eliot would cease to be a secretary at Faber, but in the years that followed would be a vital support not just to her husband but also to the company for which he worked for almost 40 years.

The Faber collegialism allowed individual editors readily to share their enthusiasms. But the company’s particular way of doing things did lead to some missed opportunities.

In 1953 the company published Gerald Durrell’s first book, The Overloaded Ark, which became a huge success. Before its publication, however, Durrell, in need of funds for another expedition, offered Faber & Faber his next book. Despite the enthusiasm of Book Committee members for the first book, Geoffrey Faber insisted that the company did not give contracts for a second book before the first one was published. Durrell took it (and all his future bestsellers) elsewhere.

Yet one of Faber & Faber’s most famous discoveries also came about because of its peculiar ways with the material that it received. For in 1954 William Golding’s Lord of the Flies found an appreciative reader at 24 Russell Square after it had been rejected by up to 20 other publishers.

It was spotted by Charles Monteith, who found the typescript in the slush pile: the collection of unsolicited manuscripts that was regularly shared out amongst readers. It was not the likeliest place to discover either a masterpiece or a bestseller. The text that Monteith found was dog-eared from the number of hands through which it had passed. It was called ‘Strangers from Within’. Monteith was struck by it and contacted Golding, then an English teacher at Bishop Wordsworth’s Grammar School in Salisbury. He persuaded the novelist to make significant cuts and revisions, and to change the title to Lord of the Flies.

It was the first and probably the greatest of Monteith’s publishing coups, and satisfyingly it was made possible by sheer critical acumen. Over the preceding two decades new Faber novels had appeared and disappeared, usually the first items in each new catalogue, yet this was the first since Sassoon’s Memoirs of a Fox-Hunting Man that was to be both a popular and a critical success.

Monteith, then in his early thirties, would be with Faber & Faber until ill health forced his retirement in 1980. He was, like Geoffrey Faber, a Fellow of All Souls, and it was Faber who invited him to join the company. Badly wounded fighting the Japanese during the War, he had a legal training as well as a distinguished academic record, but found the law uncongenial.

He would bring to the company some surprising enthusiasms (science fiction, crime stories, Caribbean writing). Largely thanks to him, examples of all of these would find their place on the Faber list. He is known for extracting Golding’s classic from oblivion, but he spotted many more Faber authors. It was he who wrote to the unpublished Seamus Heaney to ask for a manuscript and who signed up John Osborne after seeing the first performance of Look Back in Anger.

Soon Faber & Faber was publishing Golding’s second novel, The Inheritors, published in 1955. It was followed the very next year by Pincher Martin: Golding, already in his mid-forties, had been released from neglect and the writing poured out. His fourth novel, Free Fall, came out in 1959. In its catalogue the company was already hailing him as ‘the most purely original and the most imaginatively exciting novelist we have today’.

This period saw the introduction of Czeslaw Milosz to a British public with his novel The Usurpers (1955) and a new work from Auden, The Shield of Achilles. Auden also edited The Faber Book of Modern American Verse in 1956.

The beginnings of Faber Drama

The new departure was drama (though Faber & Faber had, of course, always published T. S. Eliot’s plays). Charles Monteith’s purchase of John Osborne’s Look Back In Anger, ‘the theatrical bombshell of 1956’ as the official blurb put it, opened the company up to the publication of new plays. There was initial reluctance to contemplate drama publication, and Monteith’s first reaction after seeing one of the earliest performances of Look Back In Anger was to ask Osborne whether he might want to write a novel for Faber & Faber. Osborne suggested in reply that the company might instead publish his play.

Almost simultaneous with Osborne’s debut was Samuel Beckett’s Waiting for Godot, translated from the original French by the author, following its successful appearance on the London stage.

Both writers went on to publish plays the next year – Osborne’s The Entertainer and Beckett’s All That Fall – that appeared in the Faber list alongside Jean Genet’s The Maids (with The Balcony to follow in 1958). Beckett’s Endgame followed in 1958 and a volume containing his Krapp’s Last Tape and Embers in 1959. Like the Faber poetry list, the drama list remained highly select and the company had no drama department or drama editor as such.

Beckett was joining the ranks of great modern writers whose names continued to give the Faber list its distinction.

In 1957 there were eleven more of Pound’s Cantos and a collection of The Letters of James Joyce. (The great Joyce scholar Richard Ellman would complete this edition with two further volumes in 1966.) T. S. Eliot collected his critical essays in On Poetry and Poets and there was a new volume of poems by Louis MacNeice.

Great names of American poetry continued to figure: a new volume of poems by Marianne Moore, Like a Bulwark; Robert Lowell’s Life Studies; the first British publication of a selection of poems by John Berryman; and Wallace Stevens’s Opus Posthumous.

But there were also new voices in poetry. 1957 saw both Thom Gunn’s second volume of poems, The Sense of Movement, and Ted Hughes’s first volume, The Hawk in the Rain, which was to be the last of Eliot’s ‘discoveries’. (Gunn’s first collection, Fighting Terms, had been published by a small press in 1954 and would be reprinted by Faber in 1962.) Gunn’s collection was to win the Somerset Maugham Award for 1959; Hughes’s book would win the same award in 1960.

And a work that was eventually to be one of Faber & Faber’s cumulative bestsellers was taking shape. In 1957 the company published Lawrence Durrell’s Justine; in 1958 his Balthazar, and later the same year, Mountolive. Completed as the Alexandria Quartet with Clea in 1960, superintended by Durrell’s editor Alan Pringle, these were to be amongst the company’s greatest commercial successes.

This is an extract from the essay ‘The History of Faber’ by Professor John Mullan.