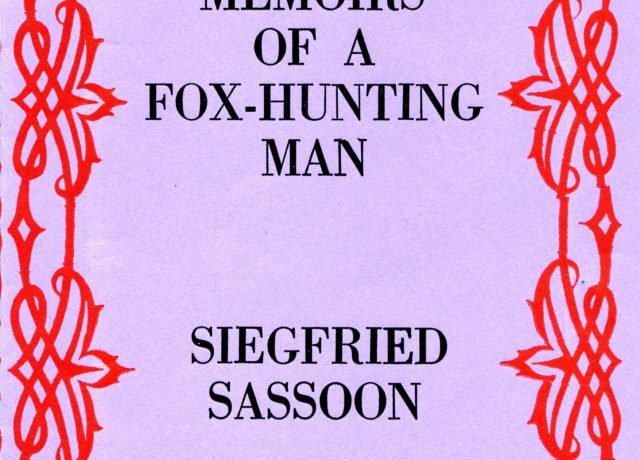 In the autumn of 1929, a pamphlet in a bold orange cover announced the publications of a new company: ‘Faber and Faber’.

The lead item was Siegfried Sassoon’s Memoirs of a Fox-Hunting Man, first published anonymously the previous year. Now it came with its author’s name declared, in an edition handsomely illustrated by William Nicholson and garlanded with the Hawthornden Prize.

The catalogue was able confidently to pronounce it a ‘now famous book . . . already a classic’. A popular success (six months after its first appearance it was being reprinted for the eighth time), it was also a work that was critically admired.

It must have seemed a propitious item with which to head this first catalogue. Faber & Faber could begin its life by announcing its belief that it could combine literary ambition and commercial appeal.

Faber and Gwyer Ltd is launched

The new company was born from a slightly older one, Faber and Gwyer Ltd, which had published its first list of books in November 1925. The ‘Faber’ in this coupling was Geoffrey Faber.

He had worked for Oxford University Press before serving in the First World War, and had business experience from the family brewing concern, Strong’s Romsey Ales. According to his wife, Enid, while the couple lived ‘over the shop’ at Strong’s she had found the smell of the brewing process so nausea-inducing (she was pregnant at the time) that she had insisted on her husband changing careers.

Faber was a Prize Fellow and Estates Bursar of All Souls College, Oxford (the latter post he continued to hold until 1951) and was also a man of letters. He wrote poetry, some of it published, and the first Faber and Gwyer list included his own ‘gravely absurd’ novel Elnovia.

The ‘Gwyer’ was Lady Gwyer, whose father, Sir Henry Burdett, had, on his death, left her his publishing company, The Scientific Press. In 1924 Geoffrey Faber had arrived to become the chairman of this company, publisher of, amongst other items, the Nursing Mirror and the Hospital Newsletter.

When he launched Faber and Gwyer in 1925, the medical publications remained. Their number was to grow over the years, and the medical list was to remain a profitable part of Faber & Faber’s activity up to the 1980s.

The very first book in the first Faber and Gwyer catalogue was Spain in a Two-Seater by Halford Ross: ‘A light-hearted record of a motor tour through Spain: anecdote and adventure combined with practical information . . . Of special interest to motorists.’

The early lists were engagingly – to a modern reader confusingly – miscellaneous, combining tasteful eccentricity with literary seriousness. Amongst the sections was a telling category, ‘Belles Lettres’: essays by Cocteau and Arthur Symons, literary criticism by Herbert Read, a Life and Letters of Smollett.

By 1928, Geoffrey Keynes’s 6-volume edition of The Works of Sir Thomas Browne had begun to appear, alongside studies of Swinburne and Rossetti. These early years also saw the first evidence of Geoffrey Faber’s ambition to build an art list with R. H. Wilenski’s key study The Modern Movement in Art (1927), dedicated by its author to Geoffrey Faber.

In amongst the books on health and nursing was also T. S. Eliot’s Poems, 1909-1925, which included The Waste Land (‘now out of print’) and a new sequence, ‘The Hollow Men’ – ‘all his verse, so far published, which he wishes to preserve’.

Eliot had joined the Board of Directors of Faber and Gwyer in the Autumn of 1925 after having worked for Lloyds Bank for eight years. His friend, the journalist Charles Whibley, had been consulted by Geoffrey Faber about finding a literary adviser. Whibley suggested Eliot (apparently over dinner at All Souls). On meeting Eliot, Faber was so impressed that he immediately offered him a place on the Board.

Eliot would remain a Director of the company for over forty years. From the first, Faber made it clear that he wished the company to publish Eliot’s own work.

Pound was one of the authors who featured in The Criterion, the quarterly periodical that Eliot had been editing since 1922. (The Waste Land had appeared in its first issue, brilliantly establishing its reputation.) He brought this journal to the company and continued to edit it from the Faber offices until it closed in 1939. If not profitable it was hugely influential, introducing early work by Auden, Empson, and Spender, amongst others, and promoting many notable European writers, including Proust and Valéry.

As well as Eliot and Faber, Richard de la Mare and Charles Stewart, who came from Oxford University Press, were Directors of Faber and Gwyer.

It was to de la Mare that Siegfried Sassoon, a family friend, offered his Memoirs of a Fox-Hunting Man. He would become the first director responsible for book production and design and would go on to establish the format and house style of a Faber book.

Frank Morley would join as a Director in 1929, leaving in 1939 to return to his native America.

The company took the lease of 24 Russell Square, originally the house of a prosperous Victorian family, where it would remain until 1971. (Art historian R.H. Wilenski advised on the conversion.)

In 1929, Geoffrey Faber bought out Lady Gwyer and renamed the company Faber & Faber. There was no actual second Faber involved. Legend has it that Richard de la Mare’s father, the poet Walter de la Mare (all of whose work Faber & Faber was soon to publish) suggested the euphonious repetition: another Faber in the company name ‘because you can’t have too much of a good thing’.

Perhaps it was in humorous protest against the shamelessly fictional coinage that Sir John Betjeman would always address his correspondence with the company to ‘Faber and Gwyer’.

The Nursing Mirror was sold, but the medical and nursing list was kept and expanded over the next decades.

The new branches of publishing that developed under Faber’s chairmanship reflected not just his own enthusiasms (notably for poetry) but the special, sometimes idiosyncratic interests of his fellow directors. Over the coming years, this freedom given to the individual director to pursue his own passions produced an unusually wide-ranging list of publications.

This is an extract from the essay ‘The History of Faber’ by Professor John Mullan.