William MacAskill is an Associate Professor of Philosophy at the University of Oxford and co-founder of non-profits Giving What We Can and 80,000 Hours, which inspire people to use their time and money as effectively as possible to fight the world’s most pressing problems. Between them they have raised over $12 million for the most cost-effective charities plus a further $380 million in lifetime pledges, enabled hundreds of people to choose careers with massive social impact and helped to launch the effective altruism movement. He and his organisations have been featured in the New York Times, the Wall Street Journal, the Today programme, and on Fox News, NPR, TED and many other media outlets globally. He has published in the leading philosophy journal Ethics and writes regularly online for Quartz, The Atlantic and Vox. 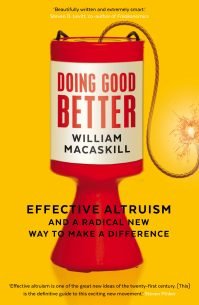 A radical reassessment of how we can most effectively help others by a rising star of philosophy and leading social entrepreneur.