Timothy Findley was born in Toronto in 1930. His first career was in the theatre; he was a charter company member of Ontario’s Stratford Shakespearean Festival in 1953, and toured several European capitals.$$$In 1963, Findley turned to writing full-time and in 1977 his third novel, The Wars, won a Governor General’s Award. It is now considered a Canadian classic. Following his bestsellers such as Famous Last Words, he won an Edgar Award for The Telling of Lies, while his collection of short stories, Stones, won Ontario’s Trillium Award.$$$Findley’s first work of non-fiction, Inside Memory: Pages from a Writer’s Workbook, made him the first two-time winner of a Canadian Authors Association Award; he had earlier won its fiction counterpart for his novel, Not Wanted on the Voyage. He has also written plays, and his third, The Stillborn Lover (1993), won the CAA Drama Award, as well as winning an Arthur Ellis Award and Chalmers Award. His later novels include Headhunter (1993) and The Piano Man’s Daughter (1995). His most recent play, Elizabeth Rex, was produced at the 2000 Stratford Festival in Canada.$$$Along with the likes of Michael Ondaatje and Margaret Atwood, Timothy Findley has become one of Canada’s most acclaimed and best-selling authors. In 2000, Faber published Pilgrim and reissued The Wars and Famous Last Words. His last novel, Spadework, was published in 2002, the year in which Timothy Findley died. 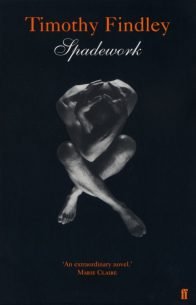 On a summer evening a gardener’s spade slices a telephone cable into distant silence. The resulting disconnection is devastating. With the… Robert Ross, a sensitive nineteen-year-old Canadian officer, went to war – the War to End All Wars. He found himself in…