Stephen Walsh is a leading English writer and broadcaster on classical music, the author of several books on Igor Stravinsky including a major two-volume biography, a large-scale study of the Russian nationalist group of composers known as the kuchka or Mighty Handful, and most recently a highly praised biography of Claude Debussy. He was for many years deputy music critic of the Observer newspaper, and also a regular critic for The Times, Financial Times and, more recently, The Independent. He now reviews for a leading arts website, theartsdesk.com. From 1976 to 2013 he was a lecturer, then professor on the music faculty at Cardiff University, and is now an Emeritus Professor of that university. He lives in Herefordshire with his wife, two dogs, two horses, seven sheep and too many squirrels. An accessible and thought-provoking biographical study of Claude Debussy (1862-1918), arguably one of the three or four most influential composers of… 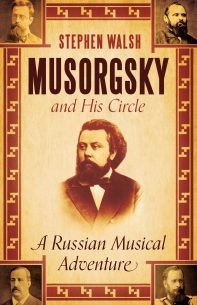 Musorgsky and His Circle: A Russian Musical Adventure, by Stephen Walsh, is an accessible and thought-provoking biography of Modest Musorgsky (or…