Simon Reeve is a TV presenter, adventurer and New York Times bestselling author. His first book, The New Jackals, an investigation into the then little-known terrorist group al-Qaeda, was published in 1998. He has travelled to many troubled parts of the world, including states in the Caucasus, Latin America, Eastern Europe, the Middle East, Africa, Far East and Central Asia, and has been around the world three times for the BBC series Equator, Tropic of Capricorn, and Tropic of Cancer. In 2005 he was awarded a One World Broadcasting Trust Award for an ‘outstanding contribution to greater world understanding’. 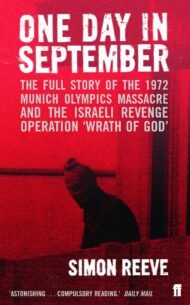 One Day in September, by Simon Reeve, gives the full story of the 1972 Munich Olympics massacre and the Israeli revenge…