Sean O’Brien is a poet, critic, broadcaster, editor and professor of creative writing at Newcastle University. His many books include a verse version of Dante’s Inferno, a novel, Afterlife, and seven poetry collections, among them The Drowned Book, which won both the 2007 Forward and T. S. Eliot Prizes, and November, which was shortlisted for the 2011 Foward, T. S. Eliot and Costa Awards, and the 2012 Griffin Prize. His Collected Poems was published in 2012. 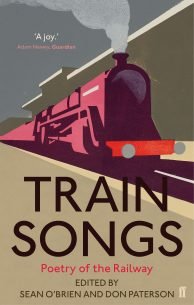 Train Songs, edited by Don Paterson and Sean O’Brien, collects the results of the huge and various inspiration that trains have…