Sandy Brown’s life was tragically short. He was born in 1929 and died in 1975 aged only forty-six.

During a television interview at the peak of his career, Sandy Brown was asked to choose between being the world’s leading acoustician or its top jazz clarinettist. ‘Excuse my arrogance’, he replied, ‘but do really believe I’m not the latter?’ And he wasn’t being arrogant. Miles Kington once described his clarinet playing as ‘wild yet controlled, acid but generous, blues-drenched but passionate, spiky, ravishing….At his best has no serious rivals in the world’.

As an acoustic architect he was in the top rank. He specialized in broadcasting and sound-recording studios and in the late 1960s and early 1970s was responsible for the architectural and acoustic design of many of London’s studios, including those for the Beatles, Eric Clapton and the Rolling Stones. 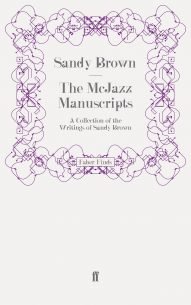