Rodge Glass is originally from Cheshire but has lived in Scotland since 1997, where he graduated from Glasgow University with an MPhil in Creative Writing. He writes for The Herald and is a regular contributor to a number of other magazines. He is twenty-nine years old and Hope for Newborns is his second novel. His first novel, No Fireworks, was published in 2005 and was shortlisted for four awards. His biography of Alasdair Gray will be published in Autumn 2008. 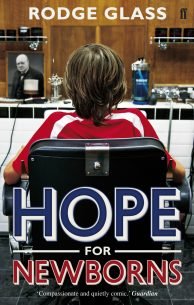 Hope for Newborns by Rodge Glass is a quirky, multi-layered novel about a dysfunctional family that confirms Glass as an author… Abe Stone is a 61-year-old alcoholic with a Henry VIII fixation going through his third divorce. When he starts receiving letters…