Richard Boon is Emeritus Professor of Drama at the University of Hull, UK, and formerly Professor of Performance Studies at the University of Leeds, UK. He is the author of Brenton the Playwright (Methuen, 1991), About Hare (Faber, 2003) and is co-editor, with Philip Roberts, of Faber’s About…; the Playwright and the Work series, which also includes volumes on Beckett, Friel, Stoppard, Churchill, Kane, Pinter and O’Casey. He is also author of The Cambridge Companion to David Hare (Cambridge University Press, 2008) and is series editor, again with Philip Roberts, of The Decades of Modern British Playwriting (Methuen, 2012/13), a series of six volumes covering the 1950s to the present.
He is co-editor, with Jane Plastow, of Theatre Matters: Performance and Culture on the World Stage (Cambridge University Press, 1998), and of Theatre and Empowerment : Community Drama on the World Stage (CUP, 2004). These are books book which deal with varieties of interventionist theatre practice in Africa, the Caribbean, North and South America, Europe, the Far East and India.
Richard Boon has researched and taught in Eritrea, Tanzania, the former Yugoslavia and Ireland. He is a Special Advisor to the British Council and a member of the Scholarships Panel of the Association of Commonwealth Universities. 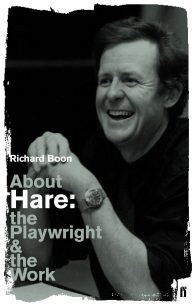 About Hare by Richard Boon, an in-depth study of David Hare and his plays, takes its place in Faber’s acclaimed The…