Professor R. F. Christian is one of the major scholars of Russian literature of the last one hundred years. Most especially he is associated with Tolstoy being accorded the highest praise from authors and critics like A. N. Wilson, Jay Parini and George Steiner. Among his publications are Tolstoy: A Critical Introduction, Tolstoy’s ‘War and Peace’: A Study and his definitive editions of Tolstoy’s Letters and Diaries (both in two volumes). The Letters and Diaries as well as his ‘War and Peace‘ book have been reissued in Faber Finds.

Professor Christian was born in Liverpool, graduated from Oxford University with a first-class honours degree in Russian, joined the Foreign Office and was Attache at the British Embassy in Moscow. His academic career began at the University of Liverpool. At the University of Birmingham he became Chair of Russian Language and Literature. He moved to the University of St. Andrews from where he retired as Head of the Russian Department.

A man of many interests beyond the academic, it has been said of him that ‘he has always welcomed change if it led to improvements in standards of teaching and research, but one who has always resisted the idea of change for change’s sake.’ 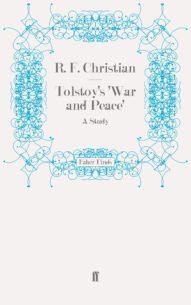 With typically disarming modesty, the author, Professor Reginald Christian, writes in his preface, ‘This is a book about a book, and…