Rachel Wright grew up in Bermuda, England, the Seychelles, and Fiji. She used to be an actress (after gaining a degree in drama in 1982, I worked as an actress for BBC Radio and various theatre companies, including one I co-founded with a friend) but now she writes full-time. (In 1989 I produced my first children’s non-fiction book and it’s been pretty non-stop since.) Her works include You’ve Got Blackmail and more than 40 children’s non-fiction books. 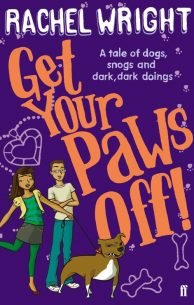 Get Your Paws Off! by Rachel Wright is a hilarious new Loz and Dex adventure full of dogs, snogs and dodgy…