Philip Roberts is Emeritus Professor of Theatre Studies in the University of Leeds. He is the author of About Churchill, and is co-editor, with Richard Boon, of Faber’s About…; the Playwright and the Work series, which also includes volumes on Beckett, Friel, Stoppard, Hare, Pinter, Kane and O’Casey. His other books include The Royal Court Theatre 1965-1972 (Routledge); The Royal Court Theatre and the Modern Stage Cambridge University Press); and (with Max Stafford-Clark), Taking Stock: the Theatre of Max Stafford-Clark (Nick Hern Books). He is series editor, again with Richard Boon, of The Decades of Modern British Playwriting (Methuen, 2012/13), a series of six volumes covering the 1950s to the present. 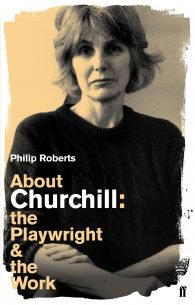