Peggy Seeger is a singer of traditional Anglo-American songs and activist songwriter, with 200 songs under her belt, one a major anthem of the women’s movement. She is a multi-instrumentalist – playing piano, guitar, 5-string banjo, Appalachian dulcimer, autoharp and English concertina – has recorded 23 solo albums, and has contributed to more than 100 others. In 2014, she was awarded the inaugural Women in Music Award for Creative Inspiration, and in 2015 she and her son Calum won Best Original Song at the BBC Radio 2 Folk Awards. She has an Honorary Doctorate in Art from the University of Salford and lives in Oxford. Her memoir First Time Ever was a Guardian, Sunday Times, Observer, Telegraph and Financial Times Book of the Year; it was also shortlisted for the Penderyn Prize. 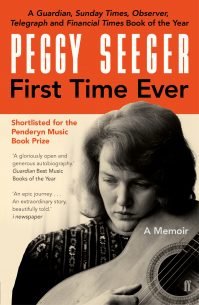