Soundscapes has been added to your Basket

Paul Robertson was born in 1952 and grew up in a caravan in Oxford. His father was a radical Marxist and his mother the daughter of Russian–Romanian Jewish immigrants. His lifelong passion for the violin began when he was eight years old, and he went on to lead the Medici String Quartet, of which he was a founder member.

He explored the connection between healing and music in the Channel 4 series Music and the Mind, and has formed unique collaborations with the pianist Sir Clifford Curzon, Sir John Tavener and the Royal Shakespeare Company amongst others. He has been recognised with numerous honorary degrees and is a fellow of the Royal Society of Arts and the National Endowment for Science Technology and the Arts. 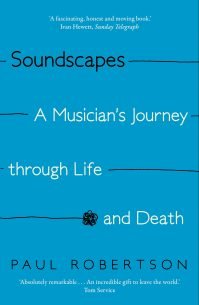 An extraordinary and poignant memoir for all musicians and musical laymen by Paul Robertson, first violinist of the Medici String Quartet. An extraordinary and poignant memoir for all musicians, spiritual thinkers and musical laymen by Paul Robertson, first violinist of the Medici…