Nicola Humble was born in Singapore in 1964 and grew up all over England, with six years in Germany. She studied English at Wadham College, Oxford, followed by a PhD on Robert Browning and history. She has been a university lecturer for fifteen years teaching at various Oxford University Colleges and then Exeter University. She has been at Roehampton University since 1992 where she teaches nineteenth and twentieth-century English literature, including a course on the literature of food which is the first in the country.
Nicola edited the Oxford World’s Classics edition of Mrs Beeton’s Household Management which garnered a lot of publicity.
She now lives in Lewes with her husband and young son.

Culinary Pleasures won Guild of Food Writers, Best Food Book of 2006 and Gourmand World Cookbook Awards 2005, Special Award of the Jury. It has also been shortlisted for the 2005 Andre Simon Memorial Award and Longman – History Today Book of the Year Award 2007. 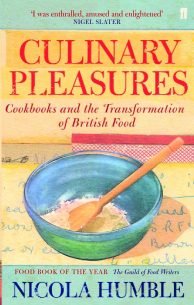 In Culinary Pleasures, Nicola Humble serves up a fascinating history of Britain’s culinary evolution through the cookbooks which have inspired us…