Recently a triumphant King Lear in New York, Michael Pennington has been a leading actor for fifty years. For the RSC, of which he is an Honorary Associate Artist, and for the English Shakespeare Company, which he co-founded, he has played Hamlet, Timon of Athens, Berowne, Edgar, Mercutio, Angelo, Richard II, Coriolanus, Macbeth, Henry V, Leontes and Jack Cade. He directed Twelfth Night in the UK, Tokyo and Chicago and The Hamlet Project for the National Theatre Bucharest. In 2004 he gave the British Academy Shakespeare Lecture, the first practitioner to do so since 1925.

He has also played leading roles in Chekhov, Ibsen, de Filippo, Euripides, Molière, Congreve, Osborne, Pinter, Harwood, O’Casey, Tolstoy, Wilde, Dostoyevsky, Stoppard, Bulgakov, Shaf-fer, Granville-Barker, Brenton, Orton, Hecht and Mac Arthur, Mamet, Strindberg and many others. He played Oedipus on BBC TV, Jude the Obscure on radio and Michael Foot in The Iron Lady. He has written User’s Guides to Hamlet, Twelfth Night and A Midsummer Night’s Dream; The Pocket Guide to Ibsen, Chekhov and Strindberg (Faber, with Stephen Unwin); Sweet William: Twenty Thousand Hours with Shakespeare; and Are You There, Crocodile?: Inventing Anton Chekhov. He continues to tour his solo shows on Shakespeare and Chekhov throughout the world. 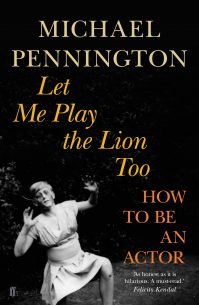 An expert guide to the theatre for actors and theatre professionals, from one of Britain’s most acclaimed actors.