Leo Docherty was born in Scotland and grew up in Gloucestershire. After studying Swahili and Hindi at university he attended the Royal Military Academy Sandhurst and was commissioned into the Scots Guards in 2001. First posted to London, he performed ceremonial duties and trained as a paratrooper. After a short spell in Germany he completed an Arabic course and served operationally in Iraq. Having passed a further language course in Pashtu, he deployed to southern Afghanistan as the ADC to the Commander of the first British forces to enter the volatile Helmand Province in April 2006. His language skills quickly led him to move from the British Headquarters to serve alongside the Afghan National Army.

A passionate traveller and linguist, he used his leave periods while serving in the Army to travel extensively in Asia and the Middle East on horseback, bicycle and by public transport. He left the Army in December 2006. 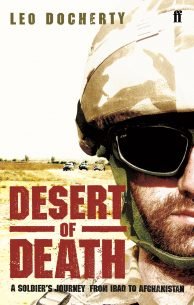 Desert of Death: A Soldier’s Journey from Iraq to Afghanistan, by Leo Docherty, is a shocking, first-hand exposé of Britain’s war… FOR THE FIRST TIME, A BRITISH SOLDIER RIPS THE LID OFF OUR CURRENT INVOLVEMENT IN IRAQ AND AFGHANISTAN. Does for the…