Julie Kavanagh was trained at the Royal Ballet School, and, while still a student, performed with a company in Cape Town, where she has spent her early childhood. As a result of injury, she gave up dancing and began a career in journalism. Her first job was on British Vogue, and for three years she worked as London Editor of Women’s Wear Daily and W. In 1977 she went to Oxford, where she graduated with a First Class degree in English. For the next decade she worked as Arts Editor of Harpers & Queen, and as dance critic of The Spectator. Under Tina Brown’s editorship she was London Editor for Vanity Fair, and then of The New Yorker until 1997, when she began to research the life of Rudolf Nureyev. (Her book, the official biography, will be published in 2005.)Julie Kavanagh is married to ex-Royal Ballet dancer Ross MacGibbon, now head of dance at the BBC. She has two sons, the younger of whom is currently studying at the Royal Ballet School.Secret Muses was awarded the Dance Perspectives Foundation De la Torre Bueno Prize in 1997. 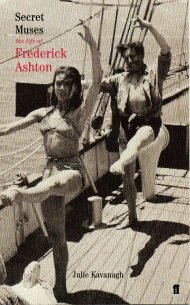