John Byrne was born in Paisley in 1940. He worked as a ‘slab boy’ at AFT Stoddard, the carpet manufacturers, before going to Glasgow School of Art. He became a full time painter in 1968 following his first London exhibition. His plays include Nova Scotia, Slab Boys, Cuttin’ a Rug, Still Life, Writer’s Cramp, Normal Service, Cara Coco and Colquhoun and Macbryde. For TV, he is best known for his BAFTA award-winning series Tutti Frutti (adapted for the stage by National Theatre of Scotland, UK Tour). He is a distinguished theatre designer and has designed productions for the Traverse Theatre, 7:84, Hampstead Theatre, the Bush Theatre and Scottish Opera. 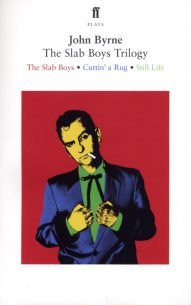