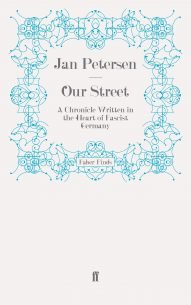 If ever a book had an unusual genesis. It belongs to that hybrid category ‘faction’, but the choice wasn’t a literary…