James Inverne is one of the UK’s leading arts journalists. He currently edits Gramophone, the world’s best-selling classical music magazine, and before that spent more than five years with Time Magazine as European Performing Arts Correspondent. He has regularly written reviews and major features for many publications, including the Wall Street Journal, the Sunday Telegraph, The Times and the Mail On Sunday and he was London Theatre Correspondent for Playbill Online . Previous books include Inverne’s Stage and Screen Trivia, Wrestling With Elephants: The Authorised Biography of Don Black, The Impresarios and Jack Tinker: A Life In Review. Prizes include the Press Gazette Award for Exclusive of the Year. 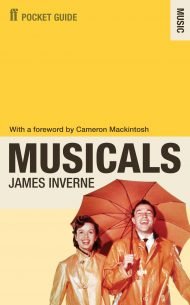 The Faber Guide to Musicals, by James Inverne, is an engaging and easy-to-use pocket guide for one of the most enduringly…