J. T. Rogers is the author of The Overwhelming, Madagascar, White People, Murmuring in a Dead Tongue and other plays. His works have been produced in London by the National Theatre, Tricycle Theatre and Theatre 503; toured the UK with Out of Joint; and been heard on BBC Radio. In New York City his plays have been seen at the Roundabout Theatre, the SPF Play Festival and commercially Off Broadway; they have also been staged in Australia, Canada, Israel, Germany and throughout the United States. His essays have appeared in The Independent, New Statesman and American Theatre. In New York City, Rogers is a resident playwright at New Dramatists and a member of the Dramatists Guild. He holds an honorary doctorate from the University of North Carolina School of the Arts. 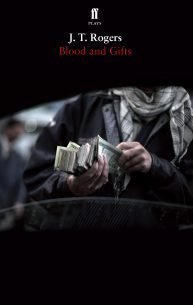 My God, Russian soldiers being shot with Chinese bullets. Sometimes the world is so beautiful. 1981. As the Soviet army burns…