Hesketh Pearson (1887-1964) is best remembered as a biographer and not as a dutiful one. He once said, ‘I love people who blow respectability and the Establishment to bits. Hence my portrait gallery.’ He wrote over twenty biographies which, in addition to Sydney Smith, included ones on Hazlitt (The Fool of Love), Tom Paine, Bernard Shaw, Oscar Wilde, Dickens and Disraeli. Before finding his true vocation, Hesketh Pearson had been an actor with Sir Beerbohm Tree’s company. Notoriety fell on him in 1926 with the anonymous publication of The Whispering Gallery: Leaves from a Diplomat’s Diary. In the words of the Daily Mail the book was ‘a scandalous fake’ and a series of ‘monstrous attacks on public men.’ Pearson was unmasked as the author. He was put on trial for obtaining money under false pretences. When asked why he had pretended to be a diplomat he answered disarmingly, ‘because I was mad.’ He was acquitted.

When he died his great friend Malcolm Muggeridge wrote in the Times, ‘Pearson loved the English countryside and bells sounding across it: the English Language and all who tried in however a humble capacity to use it worthily.’ Lives of the Wits
Hesketh Pearson
£15.00 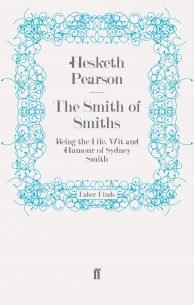