Sir Herbert Read (1893-1968) was a poet, and a literary and art critic. His experiences in the trenches led to his first collections of poetry; these in turn introduced him to the London literary world, and he contributed to T. S. Eliot’s journal The Criterion. From 1922 to 1931 he was a curator at the Victoria and Albert Museum. In 1931, when his influential primer The Meaning of Art was first published, he became professor in fine art at the University of Edinburgh, before taking on the editorship of the Burlington Magazine. An influential figure in the art world, he was one of the organisers of the 1936 London International Surrealist Exhibition and co-founded the Institute of Contemporary Art with Roland Penrose in 1947. 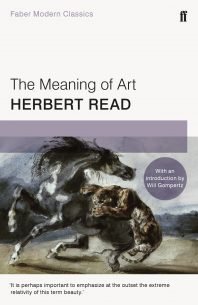