Elaine Beckett grew up in Kent and studied music, film and architecture in London. She has mainly worked as a university lecturer. In 2008 she moved to Dorset where she joined a poetry group led by Annie Freud. In 2012 she won the Bridport’s Dorset Award. Her poems have been published in Templar’s Skein anthology, South Bank Poetry, and the Bloodaxe Raving Beauties anthology, Hallelujah for 50ft Women. 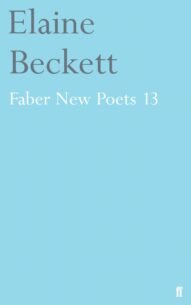 From the Faber and Arts Council, a breakthrough work from a new poet.