Peter ‘Dougal’ Butler grew up in the same 1960s London milieu as the founding members (Pete Townshend, Roger Daltrey, John Entwistle, Keith Moon) of the band that became The Who. Leaving school aged 15, Butler was first employed by HM Customs & Excise, but after finding his way into The Who’s inner circle he became personal assistant, chauffeur, bodyguard, and minder to the band’s drummer, Keith Moon. Butler carried out these functions for a tumultuous ten years, following Moon to live in Los Angeles in the mid-1970s, but leaving the Who’s employ in the year prior to Moon’s untimely death by overdose in September 1978. In the years immediately thereafter Butler worked with film and TV writers (and long-time collaborators) Peter Lawrence and Chris Trengove to produce Full Moon, a widely admired memoir of his experiences with Moon. 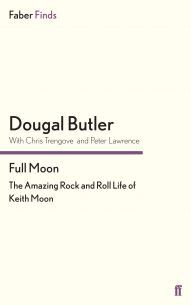