Deborah Bull was a Principal Dancer with The Royal Ballet, noted particularly for her performances in the works of Forsythe and MacMillan. Formerly Creative Director of the Royal Opera House, she is now Director, Cultural partnerships at King’s College London, as well as a writer and broadcaster. She has written and presented several programmes for BBC TV and radio, including the award-winning ‘The Dancer’s Body’. She is the author of The Vitality Plan (1998), Dancing Away (1998) and (with Luke Jennings) The Faber Pocket Guide to Ballet (2004) and The Everyday Dancer (2011). She was awarded a CBE in the 1998 Queen’s Birthday Honours list. 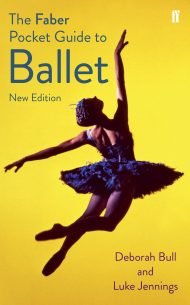 The Faber Pocket Guide to Ballet, by Deborah Bull and Luke Jennings, with in-depth descriptions of over eighty famous works of… Deborah Bull’s The Everyday Dancer is a vibrant and compelling first-hand portrait of the life of a dancer, from the writer,…