Clementine Beauvais writes for both the UK and French market. Her books written in English include the Sesame Seade series (Hodder) and the Royal Babysitters series ( Bloomsbury) and her bestselling French book, The Three Piglettes, will be published by Pushkin Press in 2017. She is an award-winning author in France and In Paris with You(French title Songe a la Douceur) has been in the bestseller charts since it was published, selling 30,000 copies in the first three months. Clementine lives and works in York, UK.

Sam Taylor (translator) is the author of four novels, including The Republic of Trees and The Island at the End of the World, and the award-winning translator of more than twenty French books, including Laurent Binet’s Booker-longlisted The 7th Function of Language, Joel Dicker’s The Truth About the Harry Quebert Affair and Leila Slimani’s Lullaby. 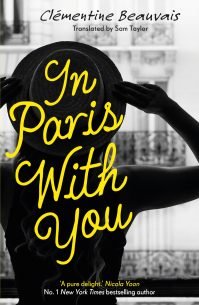 Falling in love is the easy part, especially if things go the way they should. Of course, they never do …