Sir Cecil Parrott (1909-1984), diplomat, translator, writer and scholar, is best known for his definitive translation of Jaroslav Hašek’s The Good Soldier Švejk. He also wrote two autobiographical volumes, The Tightrope and The Serpent and the Nightingale as well as his biography of Jaroslav Hašek, The Bad Bohemian (reissued in Faber Finds as is his translation of some of Hašek’s short stories, The Red Commissar)). His diplomatic career culminated with his posting to Prague where he was the British Ambassador from 1960 to 1966. On retiring from the Foreign Office, he became first Professor of Russian and Soviet Studies and later Professor of Central and South-Eastern European Studies and Director of the Comenius Centre at the University of Lancaster. 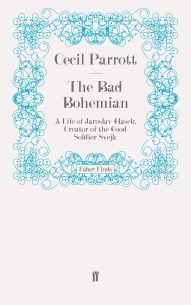 Jaroslav Hašek was the author of The Good Soldier Švejk, a twentieth-century masterpiece, and one of the funniest novels ever written.…