Brian Eno, musician, producer, visual artist and activist, first came to international prominence in the early seventies as a founding member of British band Roxy Music. His visionary production includes albums with Talking Heads, Devo, U2, Laurie Anderson and Coldplay, while his long list of collaborations include recordings with David Bowie, David Byrne, Grace Jones, Karl Hyde and James Blake, among many others. His visual experiments with light and video continue to parallel his musical career, with exhibitions all over the globe.

To date he has released over thirty albums of his own music and exhibited extensively, as far afield as the Venice Biennale and the sails of the Sydney Opera House. He is a founding member of the Long Now Foundation, a trustee of ClientEarth and patron of Videre est Credere. His latest album with brother Roger, Mixing Colours was released on Deutsche Grammophon in March 2020. The diary and essays of Brian Eno republished twenty-five years on with a new introduction by the artist in a beautiful hardback edition.

A Year with Swollen Appendices
Brian Eno
£20.00
From the Journal 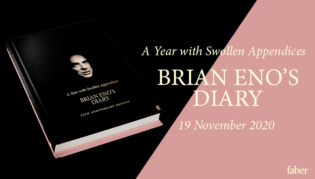