Brian Cathcart is professor of journalism at Kingston University London and a founder of Hacked Off. He has been deputy editor of the Independent on Sunday, assistant editor of the New Statesman and specialist adviser to the Commons Select Committee on media, culture and sport. He is also a historian. His books include The Fly in the Cathedral: How a small group of Cambridge scientists won the race to split the atom; Jill Dando, Her Life and Death; and The Case of Stephen Lawrence, the definitive account of the notorious racist murder, which won the Orwell Prize and the CWA Gold Dagger award. 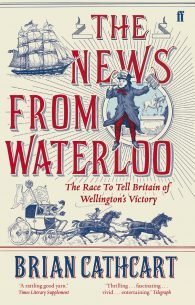 A wonderful historical caper, telling the farcical tale of attempts to be the first to break the news of the British…

The News from Waterloo
Brian Cathcart
£9.99 A wonderful historical caper, telling the farcical tale of attempts to be the first to break the news of the British…