Amit Chaudhuri is the author of seven novels, the latest of which is Friend of My Youth. His most recent book, Finding the Raga, is a work of non-fiction in which he explores his relationship to, and understanding of, North Indian classical music. He is also an essayist, poet, short story writer, singer and composer. James Wood, writing about Chaudhuri in the New Yorker in 2015, said, ‘He has beautifully practiced that “refutation of the spectacular” throughout his career, both as a novelist and as a critic . . . Chaudhuri has made the best case for his aesthetic preferences in his own measured, subtle, light-footed fiction.’ Writing about him in 1993, Wood had said in the Guardian, ‘Chaudhuri writes radiantly exact prose’.

He has written three books of poems: St Cyril Road and other Poems, Sweet Shop and Ramanujan. He has three books of essays: Clearing a Space, Telling Tales and The Origins of Dislike. Among the books he has edited is the Picador/Vintage Book of Modern Indian Literature.

Chaudhuri is a Fellow of the Royal Society of Literature, and became Honorary Fellow of the Modern Language Association in 2020. Awards for his fiction include the Commonwealth Writers Prize, the Betty Trask Prize, the Encore Prize, the Los Angeles Times Book Prize for Fiction, and the Indian government’s Sahitya Akademi Award. In 2013, he was awarded the first Infosys Prize in the Humanities for outstanding contribution to literary studies, ‘for his imaginative and illuminating writings in literary criticism, which reflect a complex literary sensibility, and great theoretical mastery, along with a probing sense of detail’.

He is a recorded singer in Indian classical music, and is a recipient of the West Bengal government’s Sangeet Samman for his contribution to classical music. Sumit Mitra wrote in India Today, ‘Chaudhuri’s boyish charm may match the subtle elusiveness of his prose but is out of character with the commanding bass of his voice and the lightning taan, delivered with the energy one would associate with only a handful of maestros’. He began his project in experimental music, ‘This Is Not Fusion’, in 2005. David Mossman, the founder of the legendary London jazz club, the Vortex, said, ‘I’ve been working with everyone in jazz for the last twenty years, from Nigel Kennedy to Jamie Cullum. Amit Chaudhuri’s music is one of the most important projects I’ve heard.’

He is Professor of Creative Writing at Ashoka University. In 2015, he began an annual symposium in Calcutta, under the rubric of ‘literary activism’, to create a non-professionalised space for critical discussion on creative practice, raising critical questions no longer explored either in academic ‘conferences’ or literary festivals. This symposium has since take place in Delhi, Oxford and Paris. Chaudhuri curates and edits the website literaryactivism.com.

In the same year, he also began a movement, now known as Calcutta Architectural Legacies, to protect Calcutta’s early twentieth-century non-heritage residential houses, and also to engage with the modernity from which they arose. He is married to Rosinka Chaudhuri, and they have a daughter, Aruna.

Biography
1962
Amit Chaudhuri was born in Calcutta. His father, Nages Chandra Chaudhuri, was an executive in Britannia Biscuits. His mother Bijoya was a singer of Tagore songs. They soon moved to Bombay, where Chaudhuri grew up.
1967
Chaudhuri joined Cathedral and John Connon School. He knew no English: his parents had made a point of only speaking with him in Bengali. He picked up English from Ladybird Books and comics, and wrote a story about a dog.
1983
Went to University College London to do a BA in English after a protracted period of abeyance when he was learning Indian classical music. He never went to lectures.
1986
The first poem Chaudhuri wrote about a ‘real’ place, ‘St Cyril Road, Bombay’, was published in the London Review of Books.
1986
Wrote a credo (unintentionally opposed to magic realism) saying nothing the imagination produced could match the unexpectedness of the real. Began, in his gap year in St Cyril Road, to write a novel on this basis.
1987
Arrived at Balliol College, Oxford, to do a PhD on the poetry of D. H. Lawrence.
1991
First novel, A Strange and Sublime Address, published. It won the Betty Trask Award, the Commonwealth Writers Prize (Eurasia), and was shortlisted for the Guardian Fiction Prize.
1992
HMV India released Chaudhuri’s recordings in which he sings in the North Indian classical tradition. He becomes Creative Arts Fellow, Wolfson College, Oxford.
1993
Chaudhuri’s second novel, Afternoon Raag, published. It won the Encore Prize and Southern Arts Literature Prize. He appeared for his viva for his DPhil at Oxford a week after the novel’s publication.
1994
HMV India released a second cassette of Chaudhuri’s singing in the North Indian classical tradition: Classics from the Kunwar Shyam Gharana.
1999
Returned to India from the UK, having had enough of the transformations created in that country by Thatcher and Blair. His first three novels were published in the US in an omnibus edition, Freedom Song.
2000
Chaudhuri won the Los Angeles Times Book Prize for Fiction.
2001
Published his fourth novel, A New World, then decided to escape the stranglehold of novel-writing. From now on, he wrote stories and essays, and developed a project in music, 'This Is Not Fusion'.
2003
Awarded the Government of India’s Sahitya Akademi Award for A New World.
2007
Releases This Is Not Fusion, his first album of experimental music, bringing together the raga with blues, jazz and pop. Clearing a Space, his first collection of critical essays, is published. The Guardian carries an editorial on him in its 'In Praise of . . .' series.
2009
Returns to the novel after nine years with The Immortals. Becomes Fellow of the Royal Society of Literature.
2010
Found Music, his second album of experimental music, comes out. He performs a song from it on BBC's The Culture Show.
2012
Awarded the inaugural Infosys Prize in the Humanities for outstanding contribution to literary studies.
2013
His first major book of non-fiction, Calcutta: Two Years in the City, is published.
2014
Begins symposiums in a series called ‘literary activism’.
2015
Publishes his fifth novel, Odysseus Abroad.
2017
Publishes his seventh novel, Friend of My Youth.
2018
His second book of poems in thirteen years, Sweet Shop, is published.
2019
Elected to honorary fellowship of Balliol College, Oxford.
2020
Elected to honorary fellowship of the Modern Language Association of America.
2021
Publishes Finding the Raga, Chaudhuri's account of his relationship with North Indian classical music, and Ramanujan, his third collection of poems.
Books by Amit Chaudhuri 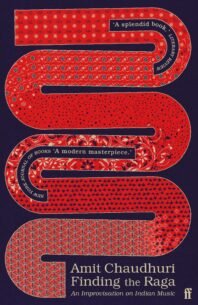 ‘Amit Chaudhuri has, like Proust, perfected the art of the moment… [he] is a miniaturist, for whom tiny moments become radiant,…

Friend of My Youth
Amit Chaudhuri
£8.99 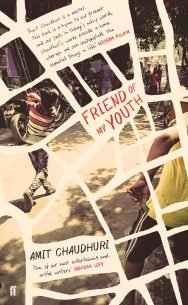 ‘Amit Chaudhuri has, like Proust, perfected the art of the moment… [he] is a miniaturist, for whom tiny moments become radiant,… 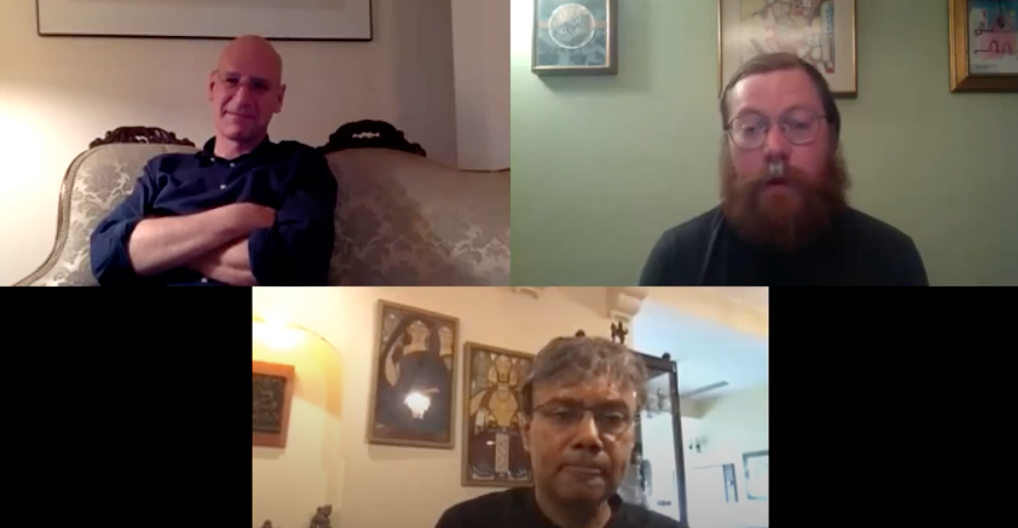 Amit Chadhuri, author of Finding the Raga, in conversation with Paul Muldoon
Praise for Amit Chaudhuri

‘Chaudhuri writes radiantly exact prose. He appears to carry this talent like a camel its humps, so natural and inescapable and warmly lazy it seems . . . Decades before “autofiction” would become . . . the favoured, modish escape from the strictures of traditional realism . . . Chaudhuri was quietly practising his idiosyncratic version of “a refutation of the spectacular”.’

‘Chaudhuri has already proved he can write better than just about anyone of his generation.’

‘Amit Chaudhuri has, like Proust, perfected the art of the moment. ’

‘His novels are the most internal, psychological, delicately written, introspective of all the contemporary Indian novelists. He’s a great prose stylist; he writes the novels that Virginia Woolf would have written had she grown up in India.’

‘The best living writer of the English sentence.’

‘Abhi, Babla, Sandeep, and Chhordimoni were going to sleep in the large bed. Because the nights were cold and the dawns chilly, a great soft-textured quilt, which yielded to their fingers like bread, had been provided for them . . . The quilt was like a spacious cave in which their legs roamed and scurried with the exuberance of little bears.’

A Strange and Sublime Address

‘Her hair is troublesome and curly; when she was young, it was even thicker than it is now . . . each strand has a gentle, complicated undulation travelling through it, like a mild electric shock or a thrill, that gives it a life of its own; it is visually analogous to a tremolo on a musical note.’

‘It’s not for everyone,’ he concluded. ‘What?’ I asked . . . 'Life,’ he said, and this broke the spell. We turned, and walked into the lane going right, towards the steps to Hanging Gardens and Kamala Nehru Park. ‘It’s not everyone’s cup of tea.’

Friend of My Youth

‘Basant, the springtime raga, must be performed only in the spring; the season and weather, and not just the notes of the composition, are part of the raga’s textuality. The raga is not about the world; it’s of it.’

Finding the Raga
From the Journal 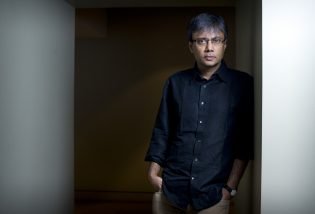