A.S.J. Tessimond (1902-1962) was born in Birkenhead. His education was at Charterhouse, before running away at sixteen, and Liverpool University. On coming to London he worked in bookshops for a time before becoming a copywriter. After avoiding military service in World War II, he later discovered he was unfit for service. An eccentric, he has been well described as a night-lifer, loner and flaneur. He loved women, was always falling in love, but never married. In later life, he became manic-depressive which neither psycho-analysis nor electric shock therapy could cure. He died of brain haemorrhage in his Chelsea flat.
Three volumes of verse were published during his lifetime: ‘The Walls of Glass’ (1934), ‘Voices in a Giant City’ (1947) and ‘Selection’ (1958). He was a minor poet but a distinctive one

Books by A. S. J. Tessimond 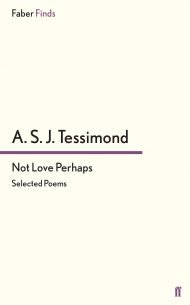 Arthur Seymour John Tessimond – Jack to his family, John in later life – was born in Birkenhead in 1902 and…